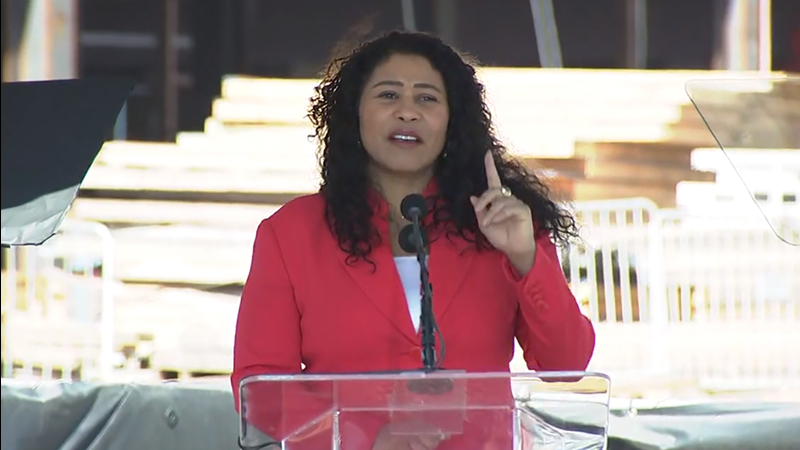 It comes as San Francisco gets ready to ramp up for the return of workers to many offices around the City after two years of the COVID-19 pandemic.

The mayor announced that as of Friday, businesses will no longer have to require proof of vaccination or a negative COVID test.

It's a move largely aimed at bringing business back and foot traffic back to the city. San Francisco's downtown's been plagued by the pandemic.

"We see it in our empty downtown offices in the for lease signs in Union Square the half-built hotels," said Breed.

"Our recovery will not be easy. It will not be quick, but it is coming, it's coming. San Francisco is coming back."

Mayor London Breed and San Francisco business leaders are planning to work with employers to start bringing workers back into offices.

And signs of that comeback could be seen at the Ferry Building Wednesday.

Lydia Walker works for a company returning to the office today. "It's nice to have lunch with my coworkers, so I'm happy about that," said Walker, noting she's not too sure how long it will last.

"We are not going to be back full time. We're going to be doing a hybrid and we may eventually go remote only."

It's a similar situation for Daniel Zhang who has a choice of whether to go to the office and he's hoping it stays that way.

"I think everyone is kind of on the same page where we have the ability to go into the office if we'd like to and having that flexibility is nice," said Zhang.

For Walker, the commute is a major deterrent to coming downtown.

"I miss the absence of a commute very, very much. I'm much more productive without spending an hour on the train," she said.

RELATED: Will San Francisco's Financial District ever bounce back?

The mayor pointed to public transit not only as a convenience but also a key to her climate policy.

"Getting people out of their cars, creating dense walkable neighborhoods like the ones we're building right here on this Waterfront - that's climate action."

The mayor also put the spotlight on those struggling with mental health and addiction.

"We're adding hundreds of treatment beds working with community partners, we will launch an overdose prevention program, and the first drug sober center in our city's history," said the mayor.

Public safety was another pillar of Mayor Breed's State of the City, calling a lack of police staffing a "crisis."

"We simply do not have the police staffing to meet the needs of a major city especially as we welcome back workers and visitors and fixing this starts by filling our police academy," said Breed.