Is the Bay Area commute really that bad? We did an experiment 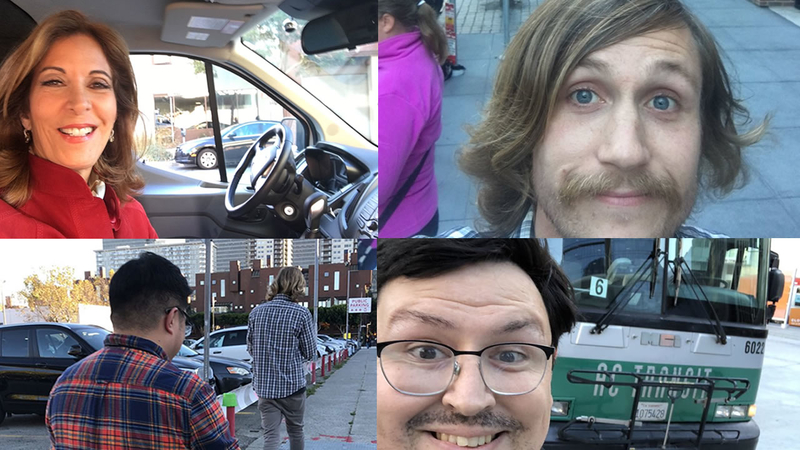 SAN FRANCISCO (KGO) -- Everyone knows the Bay Area commute is rough -- OK, really rough. A new report actually says it's the second worst in the country.

So what's the fastest way to get where you want to go in the bay?

To help answer that question, we put four different modes of transportation to the test.

We sent four ABC7 staff members from our station in San Francisco to the Downtown Berkeley BART Station, which is about a 12-mile journey. One person took AC Transit, another BART, a third tried hopping in a Casual Carpool and ABC7 News reporter Lyanne Melendez drove.

Here's how it went down:

Justin, Tom, Leonard and Lyanne started at our station, located along the Embarcadero in San Francisco.

They then all took off at once, heading off on their own in the hope of getting to Berkeley first.

Sky 7 is tracking us as the commute challenge has started from the Embarcadero in San Francisco to downtown Berkeley who will get there first? We’re driving! #BetterBayArea pic.twitter.com/i45TzNDZIH

As expected by many ABC7 viewers, Justin took a quick lead, walking to BART.

Followed by Leonard, who luckily hopped on the right AC Transit bus...

5:26 pm Leonard here! Made it to the AC Transit on time! pic.twitter.com/6jYiXd6JBr

And Tom had so much hope that he'd scoop up a Casual Carpool ride quickly.

You'd think driving would get you there quickly. But this is Bay Area traffic, after all, and one accident can ruin your commute. Poor Lyanne...

Oh no, I think there’s an accident in the Bay Bridge. pic.twitter.com/DHW3OuGYnO

There was a lot of waiting...

And we mean LOTS of waiting...

5:26pm. It's getting hot in here. Justin on BART, heading to Berkeley. https://t.co/WJvs3MpLmx #BetterBayArea pic.twitter.com/IVgOJAFyjb

And then finally, they were getting somewhere.

And, as predicted, Justin came out victorious thanks to a speedy BART train. BART for the win!

So while he was busy celebrating with cake (yes, Justin was so far ahead of everyone that he had time to buy this delicious cake)

As Justin waited for @LyanneMelendez, Thomas, & Leonard, he saved money on gas & had this 👇🏼 #BetterBayArea pic.twitter.com/2ARPRuS14z

Leonard and Lyanne finally caught up.

We made it! Downtown Berkeley #driving #commute challenge #betterbayarea one hour and 20 minutes. pic.twitter.com/xRdjQPEpme

And the challenge was completed.

But wait... what about Tom? He actually never caught a ride from Casual Carpool. Neither did anyone else waiting for a ride to Berkeley. Because no one ever showed up. But at least he made a friend.

To hear how their journeys went in their own words, watch this Facebook Live below:

So Bay Area... what route should we test next time? Share with us using #BetterBayArea.