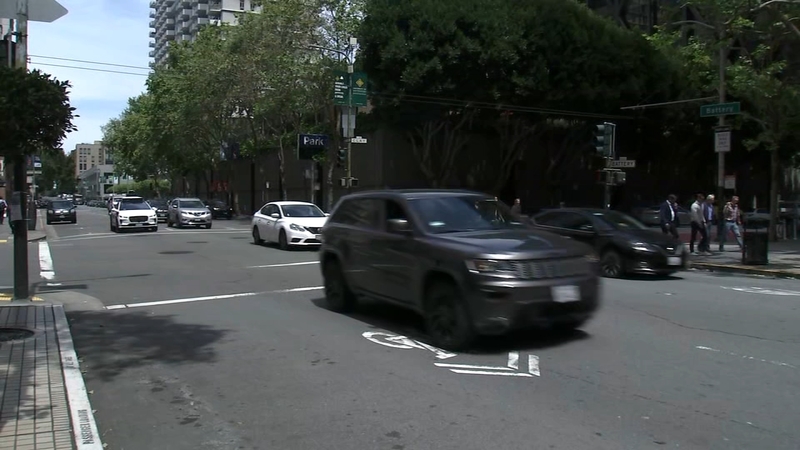 SAN FRANCISCO (KGO) -- On a regular weekday, Battery Street has bumper-to-bumper traffic. SFMTA is planning to rearrange Battery between Market and Vallejo streets as well as Sansome Street between Market and Broadway to create a two-way bike lane.

Depending on who you ask, making changes to that corridor can be controversial.

Daniela Hernandez is a Lyft driver constantly taking Sansome and Battery streets. We asked her what she thought about the future changes.

As we walked down Battery Street we met Susan Brown, she is the daughter of former San Francisco Mayor Willie Brown. She lives in the East Bay.

Luz Pena: "Has it become more inconvenient for you to drive into the city?"
Susan Brown: "Yes, the traffic is murderous."
Luz Pena: "You're okay with the changes that might make that worse?"
Susan Brown: "Yeah, I am because of the climate crisis and because for those of us who can and have the luxury of being able to walk and move freely. I think it's perfectly fine."

San Francisco has 18.7 million square feet of vacant office space. To put it in perspective that's nearly 14 Salesforce towers. How is San Francisco making it easy for these workers to come back with changes like this that could increase traffic? We met up with SFMTA's Director Jeffrey Tumlin.

Jeffrey Tumlin: "Or bike which is even safer"
Luz Pena: "Yes, but you can't bike from the East Bay. So wouldn't that be making this whole thing harder for people to come back to the office?"
Jeffrey Tumlin: "Again, I really want to emphasize. This is a win-win solution here. We are providing exactly the same number of traffic lanes at the peak there are now. We are not taking any space for people who need to drive. What we are doing is providing a good alternative for San Franciscans"

SFMTA's Battery and Sansome streets plan goes like this:

"We are going to take the curb lane, which currently has parking and this bike station, and we are going to turn that into a peak-only traffic lane. So that car traffic can continue to flow smoothly for the first safe bike facility in all of the financial district," said Tumlin.

All this is part of a bigger plan. We spoke to Janelle Wong, Executive Director of SF's Bike Coalition.

Luz Pena: "Why touch Battery and Sansome if they are not part of the high injury network?"
Janelle Wong: "I think it's about commuting. It's about traveling in the downtown area. Not in a car which is what the city wants to encourage," and added, "We are working with the city and the SFMTA to create a connected network of streets."

Two years ago, SFMTA was planning to implement congestion pricing to deter people from driving.

Luz Pena: "Are you still considering charging people to drive in downtown San Francisco?"
Jeff Tumlin: "There is a study that my sister agency the SFCTA has been leading around downtown congestion pricing. That study is currently on pause because the economic impact of COVID is affecting everyone. Congestion pricing means setting the pricing at the lowest level that means that things are not backed up and that traffic flows smoothly and taking the revenue and investing it in more space-efficient alternatives to driving that make it possible for people to continue driving."

"It means more frequent service, longer hours of service, new lines being reactivated that haven't been running in two years. It means lines that never existed have been invented in order to accommodate the dramatic change in travel patterns in the city," said Tumlin.

"A modern traffic management system that is my goal," said Tumlin.

San Franciscans can voice their opinion on this project until May 6.