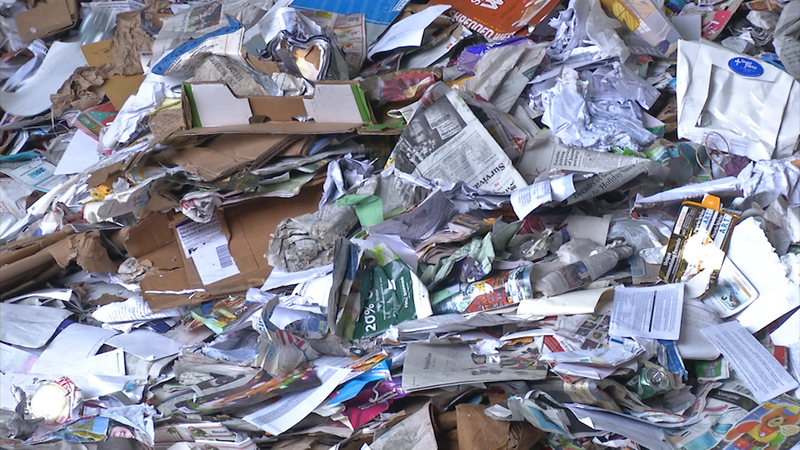 SAN FRANCISCO (KGO) -- There is a recycling crisis across the country and it's hitting California particularly hard.

Recyclers are scrambling to find places to send all your sorted waste since China tightened rules earlier this year.

When most of us put out our recycling on trash day, we dump all our glass, plastic and paper in the same bin. Recyclers sort through it, bundle it up and ship it overseas to be recycled.

For decades, much of that waste was sold to China, the world's single largest importer and recycler of scrap metals, plastic and paper.

Mark Murray is with Californians Against Waste. He said, "We've taken for granted a lot of the material that we were putting in our curbside bin was getting shipped to China, being processed, some of it was being recycled there. A lot of it was being thrown away."

Murray says, for years, we've been passing our recycling problem to China.

"It's a wake-up call for California," said Murray.

By 2012, China was receiving nearly half of all the recycling that Americans shipped out of the country. Add in one-third of Europe's waste and China had more recycling than it could ever use.

Many of those materials could not be recycled. They were ending up in landfills, the environment, or worse, taking a human toll.

TAKE ACTION: Get help with recycling, trash and composting

A documentary released in 2016 called "Plastic China," by CNX Media Corporation, gave the world a look inside China's plastic underworld. It focuses on an unschooled 11-year-old girl who lives and works with her family in a plastic recycling workshop.

The film went viral in China and was quickly deleted from the country's internet. Now the country is trying to clean up its image.

In January, China stopped taking most of the dirty recycling it called "foreign garbage."

"China is doing the right thing," said Murray, "They're sending a message to us saying let's stop putting this garbage in our recycling bin. Let's only put in the recycling bin the products and packaging that are truly recyclable."

The move has created a crisis for recyclers here, now facing mountains of materials they can't get rid of.

At the Marin Sanitary Service, spokesperson Kimberly Scheibly show us piles of recyclable waste piling up.

Huge bales of paper stacked 10 feet high, stretching as long as a football field, were piling up as recyclers wait for someone to take it.

It is still struggling to find buyers as more recyclables arrive.

At the Port of Oakland, they say other countries are filling some of the need.

Port of Oakland spokesperson Michael Zampa said, "Exports to China are down due to tighter restrictions, but exports to neighboring countries is soaring."

"Scrap paper exports to Taiwan up more than 500 percent, to Vietnam up more than 300 percent. We're seeing the same thing in scrap metal," said Zampa.

One of the reasons most recyclers are having trouble selling their materials is the stuff is dirty. That's because, in most places, we're allowed to dump it all together. Mixing all these things in the same can makes it easy, but it also seriously lowers or eliminates the value of the recyclable materials because they are contaminated.

Martin Bourque is with the Berkeley Ecology Center. Berkeley is one of a handful of cities in California that use split recycling bins to avoid contaminated waste. But the city was still worried about where its recycling waste ultimately ends up.

"Once that sea container, shipping container is opened," said Bourque, "maybe it's going on small pick-up trucks into backyard recycling, or maybe it's being opened into a big industrial facility. We can't tell the difference."

So Berkeley did a test, going as far as putting GPS tracking devices on some of its trash to see where it goes.

Some of the trackers were destroyed in the recycling process, others pinged where they were supposed to go. One showed up in an industrial park in Malaysia.

"We want to make sure that first we are causing no harm," said Bourque. "You know, if this starts getting dumped into a ravine, and when the monsoons come, it is getting dumped out in the oceans, that's being part of the problem, not the solution. I would much rather have that stuff in a landfill, where it is contained, than going out into the ocean where it can affect turtles or whales."

Berkeley is doing better than most cities because much of the trash that ends up here is clean.

"You can just imagine, if there is glass in your paper, it's like putting sand in your blender," said Bourque.

Bourque said those special split cans make it easy to decide what should go in the recycling can. The divider keeps plastic and glass from mixing with paper and cardboard.

"It has a split body with divider down the middle of it to keep the materials separate," said Bourque.

"You have to make a decision, which side is my stuff going in, and if you really have to ask yourself, this side or that side, maybe it shouldn't go in there at all," added Bourque.

The split bin is now gaining attention, Milpitas in the South Bay and Windsor in the North Bay both recently switched to split bins. But the bigger problem still remains -- we produce too much trash and we're running out of places to put it.

You can help build a better Bay Area by following your recycler's rules. We've made it easy for you. Check out our TAKE ACTION page. We've listed links to every Bay Area recycling agency.