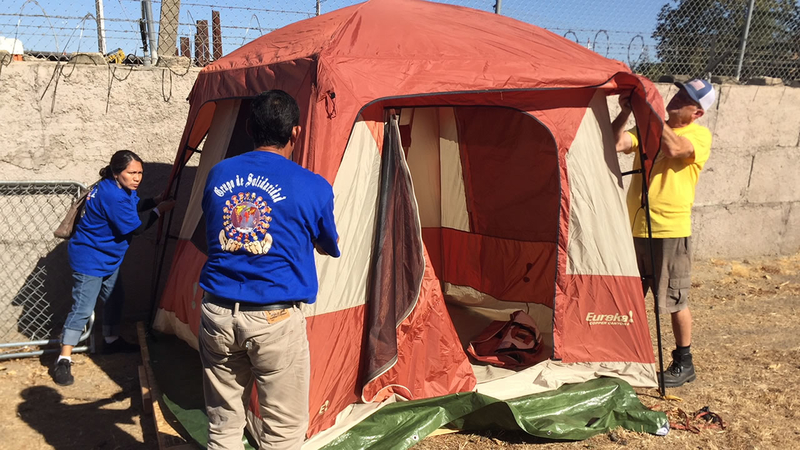 SAN JOSE, Calif. (KGO) -- A San Jose tent village for the homeless set up without permission on a state-owned parking lot was dismantled Monday at the direction of CHP officers. That has caused county leaders to scramble to find a long-term replacement site. However, prospects are looking dim.

The homeless are used to being uprooted and told to move, so it didn't take long for the six residents of Hope Village to re-establish their tents just down the street from the Dept. of Employment Development office on West Hedding St.

The SEIU is allowing them to use part of their property for a week while county supervisors Cindy Chavez and Dave Cortese negotiate for a new site.

A letter from the county sent to the San Jose city manager and mayor is seeking to rent a site from the city. Supervisor Dave Cortese says he needs an answer in the next 24 hours.

"We need an answer now," Cortese said, "so we can move people, keep them safe and keep them in a nice, clean, orderly environment. I mean, they did a good job of creating a sanitary, orderly camp for themselves. With government muscle, we can do better than that."

However, a majority of city council members has turned down previous requests for tent villages, citing liability issues.

"If you get a large group in an area and we say as a city this is something that we will allow you to be on, and somebody brings in a space heater and accidentally starts a fire and there's a tragedy of some sort, what is the city's responsibility to those individuals?" questioned council member Lan Diep.

City officials have indicated it would likely take two weeks before the county's request could be considered. Despite the promise of this new Hope Village concept, it appears the residents will be told to move again before a decision is reached.

It's a cycle of rejection the homeless say never ends. Nobody wants them in their backyard.

Charles Nelson has been homeless for five years.

"Oh, we don't want them here. We don't want them near us," said Nelson. "They have a concept that we're going to break in and start robbing them, stealing their stuff and no, we just want somewhere to go. We just want to be treated like a human being," Nelson said.

David Louie will have more on this story starting at 4 p.m. on ABC7 News. You can follow him on Twitter here.

Privately organized homeless #hopevillage forced out of state-owned parking lot in #SanJose this morning & quickly relocating at #SEIU lot nearby. City & County leaders working on a plan what to do next. #abc7now pic.twitter.com/VH3LA0j0cE