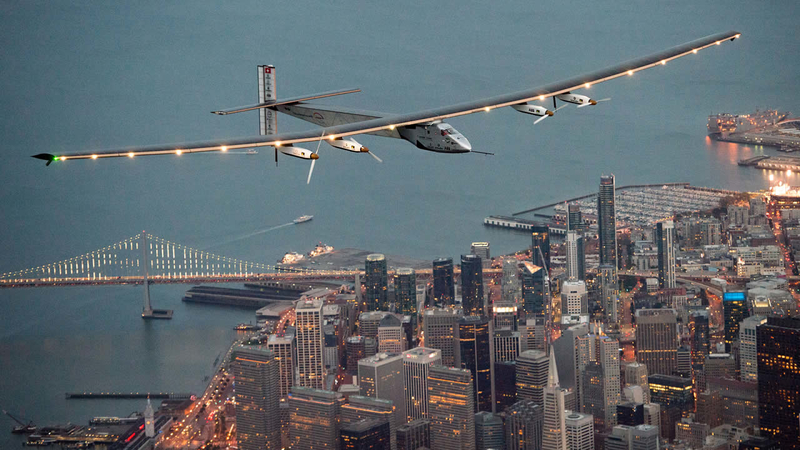 SAN FRANCISCO (KGO) -- The pilot and creators of the Solar Impulse 2 told ABC7 News they are thrilled to be in the Bay Area after arriving Saturday night.

The one-of-a-kind aircraft will remain in the Bay Area until conditions allow it to depart and then will continue on its around-the-world journey.

The Solar Impulse 2 has reached the halfway mark of circling the world.

Sky 7 HD captured the amazing sight of the world's first solar-powered airplane flying over the Golden Gate Bridge after completing a two-way flight across the Pacific from Hawaii. "I'm going to land and I did not want to land because I knew I could carry on," pilot Bertrand Piccard said.

Piccard flew the giant aircraft over the Bay Area for several hours Saturday until wind conditions were right for landing at Moffett Federal Airfield and it was a hero's welcome. "Arriving at the Golden Gate Bridge and thinking now it's a new era. Freedom is not about getting to a country, freedom is about being independent from fossil energy," Piccard said.

Solar Impulse 2 might be the world's largest experimental aircraft. Its wingspan is larger than a 747 and weighs 5,000 pounds, as much as an SUV. "Important we have an airplane, which has unlimited endurance, which gets its energy everyday to be able to fly through the night. In order to do that, the airplane has to be extremely energy efficient," project co-founder and co-pilot Andre Borschberg said.

Alternating pilot, Borschberg said the plane is equipped with 17,000 solar cells, which power the propellers and charge its batteries.

A Swiss non-profit renewable energy group put the $170 million project together, thanks to private sponsors like Google.

Some entrepreneurs told ABC7 News this solar plane is practical. "The Wright Brothers, they had no technology to transport passengers when they started, and some people were saying it's useless and nevertheless 66 years later there were two men on the moon and airplanes everywhere around the world," Piccard said.

Solar Impulse 2 left Abu Dhabi last year and returning there around the world is the goal. The solar-powered plane is expected to land in Phoenix next, and then New York.

For now, the plane and its pilots are recharging their batteries.

Our #solarimpulse Mobile Hangar next to Moffett gigantic "Hangar One" built in 1933 pic.twitter.com/UR6F4lsiNo