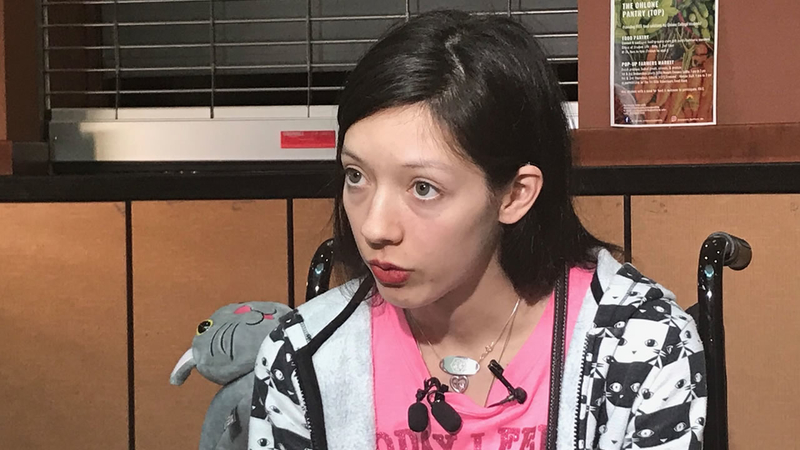 HAYWARD, Calif. (KGO) -- It was a dramatic and heroic attempt to save a man's life on the part of 22-year-old nursing student Sophia Humphrey.

She described how she tried to save the life of Tyrone Williams, who died of stab wounds on board a BART train at the South Hayward Station on Tuesday afternoon.

Humphrey is a frequent BART rider and a student at Ohlone College. She is also legally deaf and wheelchair-bound.

This nursing student is remarkable- watching an attack unfold on BART Tuesday and trying to help the man who was stabbed when others fled the train. #abc7news pic.twitter.com/ZIl9rfjfnD

She told ABC7 News she noticed a man behaving erratically and saw he was barefoot on the BART platform.

She said he gave her "an uncomfortable feeling" and she purposely boarded an adjacent train car to avoid him.

Humphrey said as the train left San Leandro, the barefoot man came barreling into her car and went up to a homeless man who was sleeping on a seat and pulled one of his shoes off. She said that's when "Mr. Tyrone intervened and told him 'don't take his shoes.'"

She said the attacker then went back into the other car and then returned a minute later to confront Williams, demanding he hand over his shoes, and when Williams refused, she says the attacker began beating Williams up.

She said, "At that point, the attacker had him pinned down and they were trying to wrestle over a knife, and that's when the other homeless gentleman in the car tried to diffuse the situation."

She said he begged the attacker "please don't stab him " but he did -- by her account, stabbing Williams five to 10 times in the neck.

The nursing student who tried to save the life of the man who was stabbed on Bart. She stayed by his side as he died. She saw him stabbed 5-10 times. #abc7news pic.twitter.com/wFj73BT2BQ

Humphrey said "As soon as we reached South Hayward, the attacker fled. At that point, I dropped my phone and was no longer in touch with emergency services and I happen to have medical gloves so I threw them on and jumped out of my chair and tried to stop the bleeding in the back of his neck and on his left side. We waited for emergency services to come and I tried to speak to him. Asking him 'hey you're a Raiders fan' because he had on Raiders clothes."

She said Williams was talking, conscious and coherent until emergency services came. She was told he died and was very upset. She said she could tell he had a good heart.

She said the encounter confirmed her decision to pursue a nursing career and to help people. She said rather than fear, she has compassion for the homeless on BART and continues to ride the system.