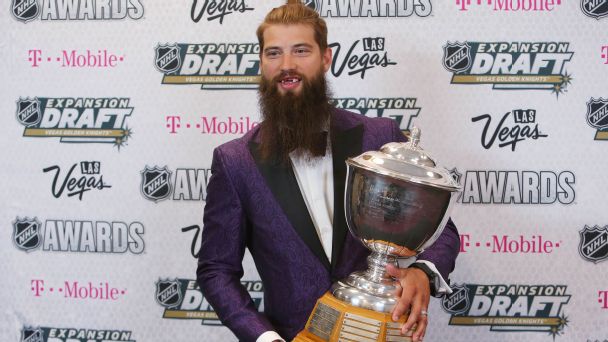 Biggest changes: A picture of consistency from season to season, the biggest change will be the glaring absence of franchise fixture Patrick Marleau, who had spent his entire 19-year career with the Sharks before signing a three-year contract with the Toronto Maple Leafs in the summer. Marleau's departure is the only marked change on a team that will continue to rely on an established veteran core consisting of Joe Thornton, Joe Pavelski, Logan Couture, Brent Burns and Marc-Edouard Vlasic.

Case for: With the possible exception of the Chicago Blackhawks, there might not be a more prolific veteran core in the Western Conference. Even with Marleau gone, the Sharks are led by an experienced nucleus that has demonstrated remarkable consistency over the past several years. They also have one of the league's criminally unheralded goalies in Martin Jones to go with young talent that will be called upon to provide much-needed depth up front. General manager Doug Wilson's knack for stockpiling talent had been evident for some time. And that was before this club got over the playoff hump in 2016 and advanced to the Stanley Cup Final, where it lost to the Pittsburgh Penguins in six games. Even with their history of playoff disappointment, even with Marleau gone, even with an aging roster, even with a slew of young up-and-coming teams in the Pacific Division, any discussion of contenders in the West has to include the Sharks. Between 2006-07 and 2016-17, only the Penguins have won more regular-season games. This team knows how to win and is equipped to enjoy another prolonged playoff run.

Case against: San Jose's important veteran core is accomplished. It's also not exactly young. Thornton turned 38 in July, nine days before Pavelski turned 33. Burns is 32 and his defensive partner, Paul Martin, is 36. Forward Joel Ward turns 37 in December. So this group, as currently constituted, will have only so many more opportunities to make a run. The fact Thornton quietly posted one of the more disappointing statistical seasons in his storied career (7 goals, 50 points) last season could also be cause for concern. It all culminated in the disappointing first-round playoff exit, during which the Sharks were outpaced by the speedy Edmonton Oilers. It was later revealed that Thornton played with a torn ACL and MCL in his left knee during that series, while Couture was forced to contend with a face that was reconfigured by a slap shot. So, San Jose's issue in the playoffs might have been more injuries than age. But this club's season will ultimately hinge on the young players expected to assume greater responsibility up front. Forwards Tomas Hertl, Joonas Donskoi and Chris Tierney will be leaned on to make greater contributions. If they can't do it, the load will continue to fall on the aging veterans.

Trade bait: After seeing his goals total drop from 21 in his first season with the Sharks to 10 last season, Ward finds himself on the wrong side of 35 and in the final year of his contract. With the Sharks overloaded on the right side, Ward could be the odd winger out.

Goalie situation rating: 7. For the second straight season, Jones and Aaron Dell will make up the goaltending tandem that has proven reliable from start to finish. There won't be many highs or lows with these guys, but plenty of consistency.

Scout's take: "They're going to miss Marleau. Marleau is a real good player. He'll help Toronto's kids. It will be nice to see how Joe [Thornton] bounces back. They went on a great run two years ago, but I don't know if that team is getting any better. I know there are other teams in the West that are getting better. The Calgarys, the Edmontons. I think Dallas and Winnipeg are going to get in this year. I think Winnipeg is ready for a run there. If Dallas and Winnipeg get in, who is going to miss that was in last year? Right now, I think San Jose misses the playoffs."