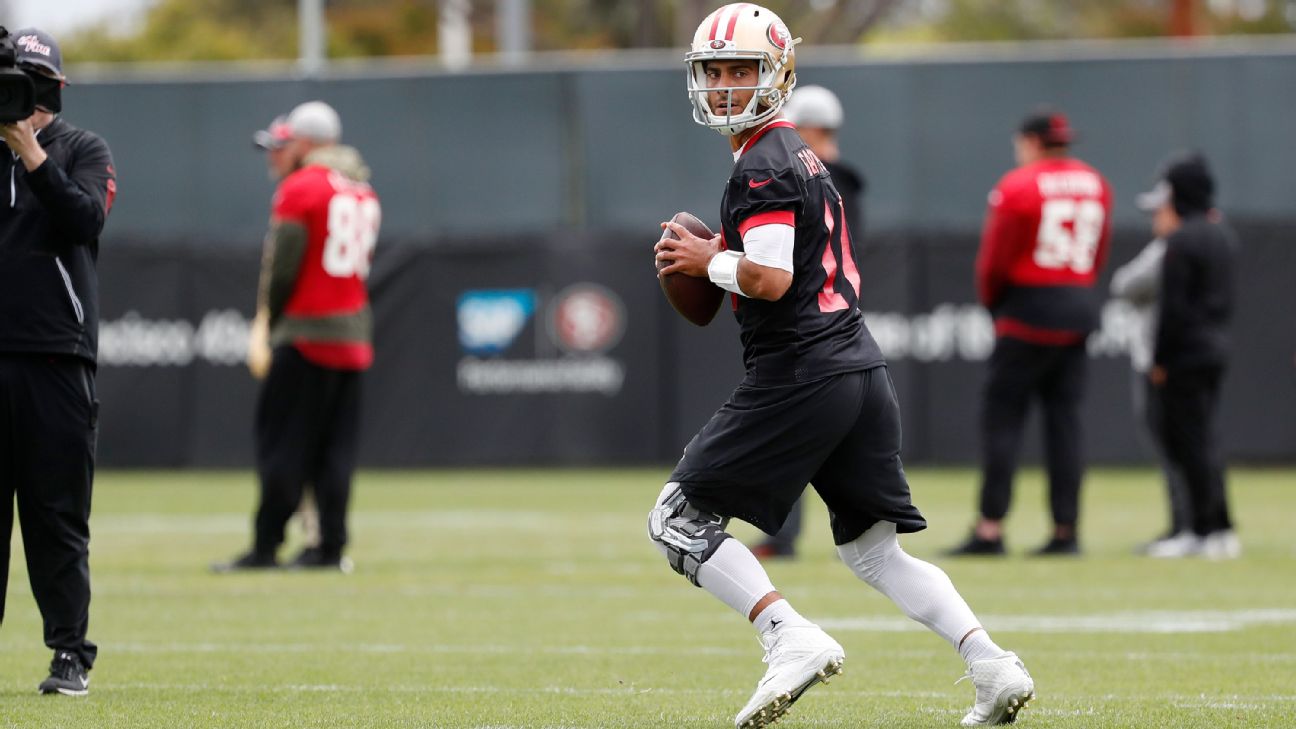 ESPN
By Nick Wagoner
SANTA CLARA, Calif. -- As San Francisco 49ers quarterback Jimmy Garoppolo took another step toward returning from the torn left ACL that wiped out most of his 2018 season, cornerback Richard Sherman is feeling as good as he has in a long time now that he is another year removed from his own injury history.

Come the start of training camp in July, the 49ers expect to have their offensive and defensive leaders back at full speed and ready for the start of the 2019 campaign. They hope that the dozen or so other players dealing with injuries also will be healthy and prepared when that time comes.

It's a group that includes linebacker Fred Warner (knee), running back Matt Breida (pectoral), tight end Garrett Celek (concussion and back), running back Jerick McKinnon (ACL), linebacker Kwon Alexander (ACL) and cornerback Jason Verrett (Achilles), all of whom did not participate in Tuesday's organized team activity and likely won't be able to do anything until training camp.

Rookie defensive end Nick Bosa joined the injured list on Tuesday when he tweaked his hamstring during team drills. He watched the rest of the practice from the sideline.

Much like his teammates, for Garoppolo to be ready for the start of the season, there's still plenty of work that needs to be done.

On Tuesday, Garoppolo participated in individual and 7-on-7 drills. He did not, however, take part in team drills.

According to coach Kyle Shanahan, Garoppolo will not be cleared for full team work until training camp in part because the team doesn't want to risk having defenders around Garoppolo's legs during offseason work.

"I think he's handling it as well as he can," Shanahan said. "He's getting used to it. It's just a long process when you recover from an ACL, and he gets as much work as he can get in. I know he'd love to be out there for every rep, but he knows that he can't, so he's trying to make the most of his 7-on-7 and do as much work in every other aspect as he can."

Wearing a titanium knee brace that he described as "really lightweight," Garoppolo already has impressed teammates and the coaching staff with how well he has moved during the first two OTAs.

After suffering the knee injury in a Sept. 23 loss at the Kansas City Chiefs, Garoppolo missed San Francisco's final 13 games.

Since then, Garoppolo has slowly checked all the boxes necessary for a return. Garoppolo said Tuesday he hasn't dealt with swelling in the knee in "a long time," and his post-practice routine no longer requires him to do as much work to keep the swelling to a minimum.

In the first pair of OTAs, Garoppolo has been particularly pleased with his ability to push the ball down the field like he used to. Garoppolo also has been making progress in the weight room, where he has been able to lift more with his left leg and even out the weights on various leg exercises.

The next step is to get reacclimated to some of the awkward things required of a quarterback evading pass-rushers.

"[It's] just the weird movements, reaction movements, things that are hard to simulate in practice where you don't want to think about it so much," Garoppolo said. "You want to react to the defense, so it's little things like that. But they're coming together."

Sherman, meanwhile, is not coming back from any sort of serious procedure and for the first time in some time is feeling back to his old self.

"It's the first time in a few years that I've been able to move and groove like I wanted to," Sherman said. "I had the MCL a few years ago, had the Achilles. This offseason, I don't have anything, thank goodness. And I'm able to just move and explode and just get to the spots I want to. I can stop when I want to stop; I can go when I want to go. It changes the whole dynamic for me."

Sherman is entering his second season with the Niners after signing as a free agent in March 2018. Last year at this time, Sherman was recovering from Achilles surgery and was not able to participate fully during the offseason program as he continued his rehabilitation.

This year, Sherman calls the difference "night and day," as he has been able to participate throughout the offseason program.

While Sherman still managed to play 14 games last season, he often found himself feeling the effects of the Achilles surgery, comparing it to having his Achilles tendon stapled back to the bone in his leg. When he had the final suture removed late in the season, Sherman said he finally began moving more freely.

The lingering effects of that Achilles procedure also resulted in Sherman dealing with a calf injury that he attributed to some overcompensation, something else he no longer is dealing with.

With the pain gone, Sherman said he also has moved on from any mental blocks that come with the injury.

"I think it goes away when you don't physically feel pain anymore," Sherman said. "Then you know you can move like you want to. When you feel pain in certain movements, you just don't want to hurt it any worse than it already is, so you kind of baby it a little bit. When you don't have it, you don't worry about it. You're just moving. You're just getting to your spots, you're moving full speed. You can never really move full speed when you have that kind of inhibition, because you're always conscious of which foot you're putting in the ground on certain cuts and the game is too fast.

"Even a guy who thinks at my pace, it's still too fast to just be like, 'Hey, I'm going to put the right foot in the ground to break on this out route when the guy is already moving.' I've got to be able to react."

At one point during Tuesday's 7-on-7 drills, Garoppolo drilled a completion to receiver Jordan Matthews over the middle on an intermediate dig route with Sherman in coverage.

As Sherman reached for the pass, it narrowly missed his outstretched fingers and landed in Matthews' hands for a would-be big gain.

"It was just a great ball and a confident throw from him, and it was just exactly what you want to see from your quarterback moving on in his rehab and where he is in the process," Sherman said. "To be only in day two and be able to make those throws already is a great compliment."

And for as much as that throw signaled Garoppolo's impending return to his teammates, it was what followed with Sherman that meant even more to Garoppolo.

"Even if it was just a little trash talking between series or whatever it is, it's a nice feeling to be back out there and be in the huddle with the guys and looking them in the eyes," Garoppolo said.
Report a correction or typo
Related topics:
sportsespnjimmy garoppolosan francisco 49ersnflrichard sherman
Copyright © 2020 ESPN Internet Ventures. All rights reserved.
More Videos
From CNN Newsource affiliates
TOP STORIES