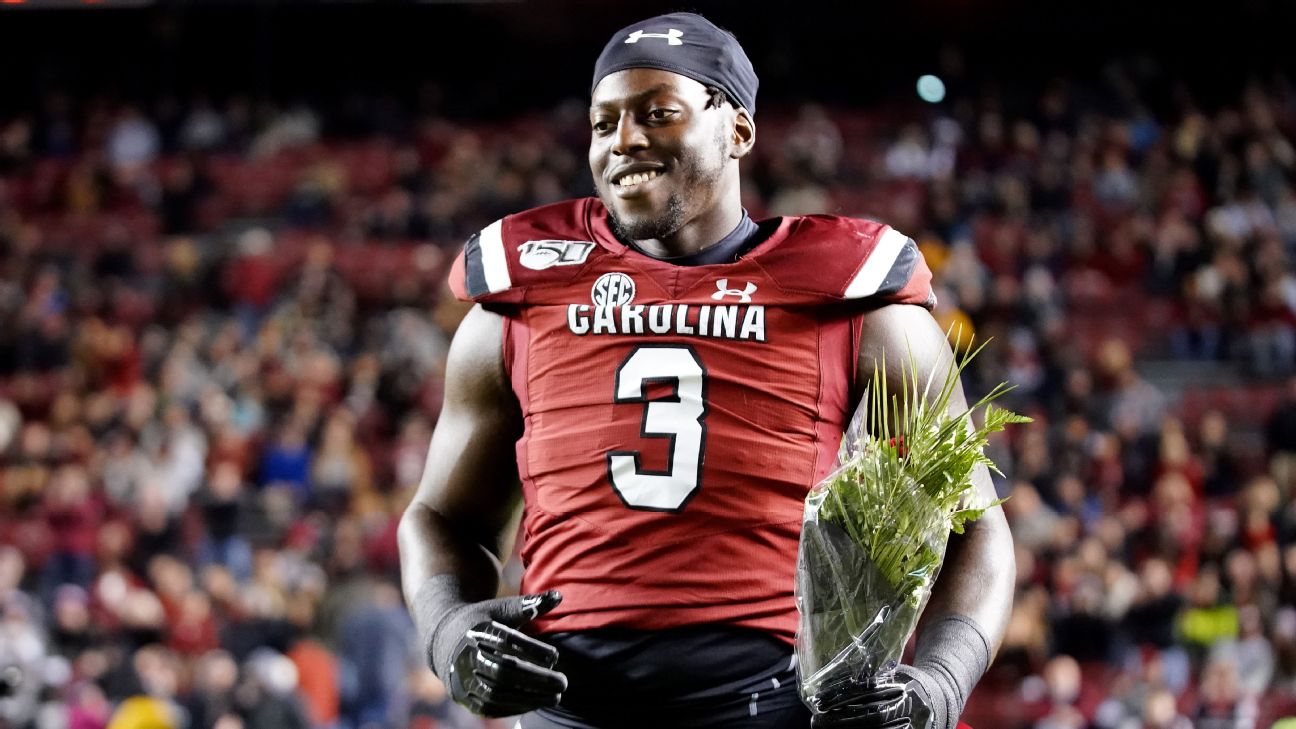 SANTA CLARA, Calif. -- For the first time since 2015, there were no trades in the top 10 picks of the NFL draft. This year, like then, it took the San Francisco 49ers to break the streak.

After watching as the first 12 teams stayed put and made their picks, the Niners traded the No. 13 pick along with a seventh-round choice (No. 245) to the Tampa Bay Buccaneers for the 14th selection and a fourth-round pick (No. 117 overall). They used the 14th pick on South Carolina defensive tackle Javon Kinlaw.

This is the second consecutive time the 49ers had a hand in stopping a trade drought; in 2015, the Niners dealt pick No. 15 to the Chargers after the first 14 picks were made in their original positions.

Of course, that newfound midround draft capital didn't last long. The Niners sprang a late-round surprise by moving up from No. 31 to the Minnesota Vikings' spot at No. 25, giving up the pick acquired from Tampa Bay in the deal.

On Monday, Niners general manager John Lynch said the team had targeted six players it would stay at No. 13 for and take if any of them were available, but when the Bucs called to move up with San Francisco on the clock, the Niners suspected they could move down just one spot and still land Kinlaw.

"He was actually the first guy on our list that we would have taken at 13," Lynch said. "We felt comfortable getting back one spot, gaining a fourth-round pick, and had a good idea that Javon would still be there. He's a guy that we had zeroed in on for a while.

"You go back to when we first built this thing and Kyle [Shanahan] and I came together, one of the things that we really believed in is that's an equalizer. In a football league where everything is set up for offenses to be successful, one of the ways you can equalize the equation is to get after and knock down the passer. We built a pretty good unit there and we wanted to keep that strong. We felt he was a great fit for that."

The trade with Tampa Bay was the first of the draft. That deal appeared to give the Niners some midround relief, but after trading the fourth-round pick to Minnesota, the Niners now are back to not owning another pick until the fifth round (No. 156 overall). In addition to that choice, the 49ers' only remaining picks are in the sixth round (No. 210) and seventh round (No. 217).

If San Francisco doesn't acquire another pick in the next three rounds, it will have the longest wait between its final first-round pick and its next choice since the 2007 Washington Redskins. Washington picked sixth that year and then not again until No. 143.

The 49ers dealt their second-round pick for defensive end Dee Ford in March of 2019 and swapped their third- and fourth-round picks to the Denver Broncos for receiver Emmanuel Sanders and a fifth-round pick in the middle of the season.

On Monday, Lynch said he was open to trading down from both picks in order to recoup some of those lost choices. But when Aiyuk remained on the board as the picks slowly crept toward San Francisco at No. 31, the Niners felt it was worth not having those midround picks in order to come away with two players they believe can be immediate difference-makers.

"To risk that to go up and get a starting receiver with a starting 3-technique that we already got, it's something we didn't think was gonna be there and we're just real happy it was," Shanahan said. "And we get what we don't have this year. That's something John and I are going to work to never be in again, but if those decisions that put us here helped us last year, we'll do that every time and that's what we're happy about."

Kinlaw becomes the fifth defensive lineman in the past six years to be San Francisco's first pick in the draft, joining Arik Armstead, DeForest Buckner, Solomon Thomas and Nick Bosa.

Shanahan and Lynch have consistently discussed the importance of having a strong defensive line since taking over in 2017 and have no qualms with continuing to invest in that group.

"I'm always down to go defensive lineman if the right guy is there," Shanahan said. "I was surprised Kinlaw was there. Ask my high school friends when we did Madden and would draft our own guys. This was back in '97 or whatever. My pick was always Strahan and theirs was always like Randy Moss. I always wanted to do D-line and I think that's what we've done here and I think John feels the same way."

Coincidentally, Kinlaw will be asked to replace Buckner, whom the Niners traded to the Indianapolis Colts for the pick that would eventually be used on Kinlaw.

Kinlaw had 35 tackles, six for loss, and six sacks in 2019 for the Gamecocks. He's expected to step in for Buckner as the 3-technique defensive tackle alongside Bosa, Armstead and D.J. Jones as well as Ford.

"I was watching DeForest since he was coming out college so I know he started off as a raw player and he developed into a monster," Kinlaw said. "So, I feel like once I can get that type of coaching, I can probably be somebody that was like him."

Like Kinlaw, Aiyuk will be asked to come in and contribute immediately after veteran wideout Emmanuel Sanders departed for the New Orleans Saints in free agency. Aiyuk had 65 receptions for 1,192 yards and eight touchdowns for the Sun Devils in 2019.

In a deep wide receiver draft that saw many of them connected to the Niners in recent weeks, Aiyuk's name had rarely come up among draft pundits. But Shanahan called Aiyuk "my favorite receiver I evaluated" with Oklahoma's CeeDee Lamb as the runner-up.

That evaluation made Aiyuk another of the six players the Niners had on their list at the 13th pick, and when he fell closer to No. 31, Shanahan and Lynch pounced.

"We added two guys here today that without a doubt are starting-caliber players who will make our team better, who will be contributors on their first contracts for a long time, and that will really help us in free agency next year, really help us in the draft next year and it will really help the 2021 49ers," Shanahan said.
Report a correction or typo
Related topics:
sportsespnnewssan francisco 49ersnflnfl draft
Copyright © 2021 ESPN Internet Ventures. All rights reserved.
More Videos
From CNN Newsource affiliates
TOP STORIES