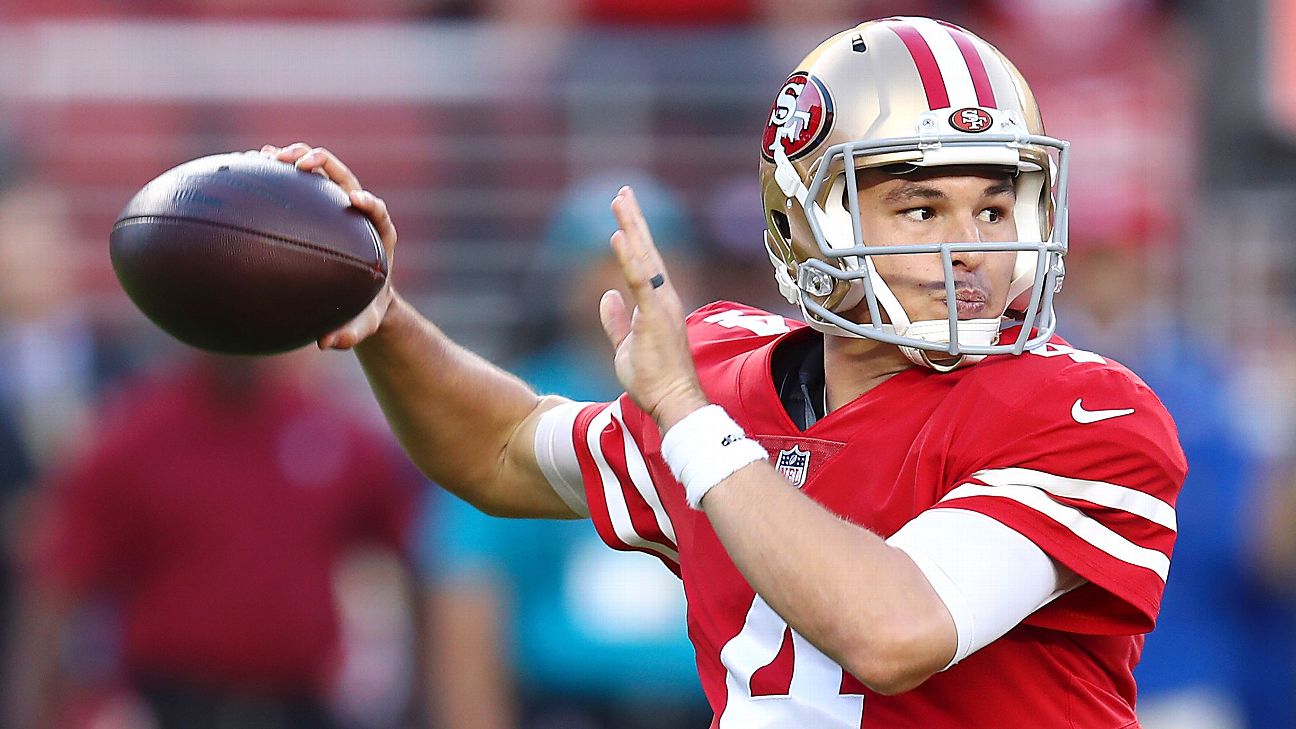 After one of the greatest statistical debuts by a quarterback in NFL history, Mullens has been named the starter for Monday night's game against the New York Giants.

Coach Kyle Shanahan informed Mullens and backup C.J. Beathard of his decision on Tuesday morning after giving the team the weekend and Monday off.

Mullens will make his second start in a row with Beathard again serving as the backup. Beathard was No. 2 for Thursday's game against the Oakland Raiders because he was dealing with a right wrist and thumb injury.

With Beathard not at full strength, Mullens went 16-of-22 for 262 yards with three touchdowns and no interceptions for a passer rating of 151.9 as he led the Niners to a 34-3 victory. The passer rating was the highest by a quarterback with at least 20 attempts in his first NFL game since 1970.

Mullens joined Fran Tarkenton (1961) and Jim Kelly (1986) as the only quarterbacks making their NFL debut to throw for more than 250 yards with at least three TDs and no interceptions since 1950.

After the game, Mullens received a congratulatory phone call from Brett Favre, a fellow Southern Miss alum. He also said he had about 600 text messages from family and friends awaiting him.

Asked Tuesday if his life had changed much in the days since the game, Mullens said he had been getting "a lot more attention on social media" though he was mostly unimpressed by his moment of fame.

"I'm done reflecting on it, to be honest," Mullens said. "It's time to get to the Giants, but it was a very cool moment and you just try to give it everything you have. And when your work pays off, it's exciting."

Mullens should find himself better equipped in his second start, not only because he now has a game of experience but also because he will get actual practice reps this week.

Because the 49ers played on Thursday night last week, they held only walkthrough practices during the week as they recovered from the previous Sunday's game against Arizona.

This week, Mullens will get full practices on Tuesday, Thursday, Friday and Saturday.

"I'm a believer in the more reps you get, the more efficient you'll be, and I think that will definitely help," Mullens said. "Last week, it was a lot of cramming for this team. We had walkthrough practices and just trying to get our bodies right before you can even get your mind right almost. So definitely the more reps will help, and I think we're excited to attack the week and see what the Giants present us."

One thing the Giants will present is veteran quarterback Eli Manning. Mullens said Tuesday he was a fan of Manning and he attended the Manning Academy Passing Camp during the summer between his junior and senior years.

Mullens recalled watching Manning go through a throwing workout and taking notes on how he handles his business.

"I think the coolest thing was just watching him throw," Mullens said. "To see how he moves in the pocket; he's got very quick feet, and it was very smooth. So, I definitely remember sitting there watching him throw and I took that all in."

As for Beathard, this is the second straight year -- of the two he's been in the NFL -- in which he lost his job after an injury opened the door for another starter. Last year, Jimmy Garoppolo replaced Beathard after he suffered a knee injury against the Seattle Seahawks in Week 12.

Garoppolo went on to win the next five games to close out the season and signed a lucrative five-year contract extension in the offseason. Beathard took over for Garoppolo this season after Garoppolo suffered a season-ending knee injury in Week 3, but Beathard sprained his right wrist when he banged it on the helmet of an Arizona Cardinals defender.

As Mullens put up big numbers against the Raiders, Beathard said he didn't think about what it could mean for him in the moment. He did acknowledge, however, that he did over the weekend.

"During the game, you know that Nick's doing a good job and it's going well for him," Beathard said. "You don't really look to the next week that fast. I guess over the next couple days, I looked at that. There were obviously speculations out there, what was going to happen, so obviously I didn't know the answer. So, it's definitely something that goes through your mind."

Beathard said he could have played last week had the game been played Sunday, and he spent the weekend replaying different scenarios in his head. He said he could "drive myself crazy" pondering different outcomes that would have kept him in the job.

Regardless, Beathard said his wrist is feeling better and he will be ready if needed this or any other week.