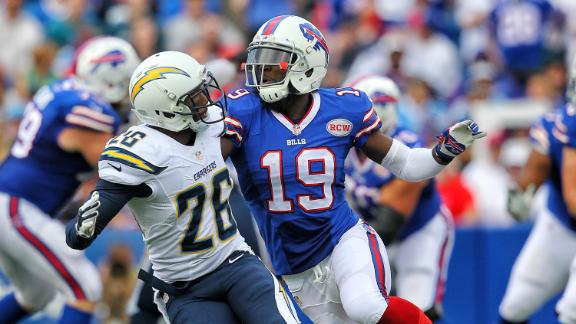 ORCHARD PARK, N.Y. -- Buffalo Bills wide receiver Mike Williams reiterated Wednesday that he is happy in Buffalo despite being deactivated for last week's game and his agent reaching out to the Bills about the possibility of a trade.

As for the nature of -- or the driving force behind -- those discussions with the Bills' front office, it depends on whom you ask.

"Mike Williams is not requesting a trade. Mike Williams wants to play," his agent, Hadley Engelhard, said Wednesday. "We're just trying to give Mike an opportunity to play.

Williams did not take a rep with the offense in Wednesday's practice, a source said. Coach Doug Marrone has not committed to playing Williams in Sunday's game against the Minnesota Vikings.

General manager Doug Whaley confirmed Monday that he granted Williams' agent permission to talk to other teams about the possibility of a trade.

"I said, 'We like Mike Williams. We expect him back, and we expect big things from him,'" Whaley said. "But like anybody, if he gets us compensation worthy of a No. 1 receiver -- which he claimed he is -- then we would entertain it."

Williams told reporters Wednesday that he did not specifically request a trade and did not tell his agent he wanted to be traded.

But he did express frustration with his lack of playing time.

According to Marrone, Williams said he was not behind the trade request.

"Mike told me that [request] came from the agent, not him," Marrone said Wednesday.

Marrone said the situation may run counter to the "team-first" attitude that he wants in the locker room.

"Yeah, I'm not gonna lie [that it's annoying]. Absolutely," Marrone said. "Someone else's problems all of the sudden become my problems."

The Bills acquired Williams in an offseason trade with the Tampa Bay Buccaneers in exchange for a 2014 sixth-round draft choice. Williams, 27, has a guaranteed base salary of $1.6 million this season, and his $5.2 million base salary in 2015 is also guaranteed.

After starting at wide receiver for the first four preseason games, Williams lost his starting job to Robert Woods by the beginning of the regular season. In five games, Williams has eight catches for 142 yards and one touchdown.