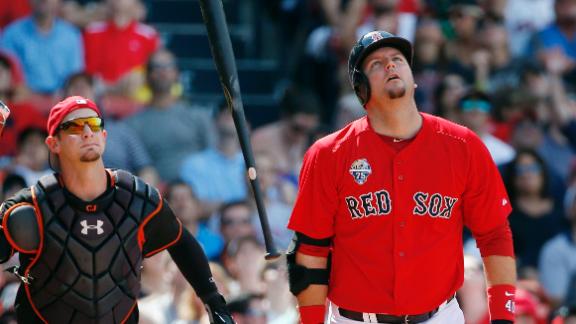 That bridge collapsed five days before the All-Star break. Manager John Farrell summoned the 37-year-old Pierzynski to the Red Sox clubhouse Wednesday morning to inform him he had been designated for assignment, then announced on his regular weekly radio appearance that Vazquez had been promoted to take Pierzynski's place and would be catching another top prospect, Rubby De La Rosa, in Fenway Park Wednesday night.

"It's an opportunity for us to invest in players that are going to be here beyond 2014," Farrell said in discussing the move Wednesday, "and while there may be other decisions that are forthcoming, we felt like the place we were going to start was behind the plate.

"That brings Christian to us, a guy we are high on his abilities, particularly as a defender and his ability to shut down the running game, and someone who continues to develop as an offensive player."

The Red Sox will have five rookies in Wednesday night's starting lineup against White Sox ace Chris Sale: Vazquez, shortstop Brock Holt, third baseman Xander Bogaerts, center fielder Jackie Bradley Jr. and right fielder Mookie Betts. According to the Elias Sports Bureau, this will be the first time the Sox have five rookies in the starting lineup in a non-September game since Aug. 16, 1987, against Texas.

"I think it's important to note that we haven't turned into completely a development situation," Farrell said. "This is still -- while they're young players -- our goal and intent is to win, and that's how the game will be managed."

This will be the major-league debut for Vazquez, 23, who was a ninth-round draft choice out of Bayamon, Puerto Rico, and won raves in spring training this season for his powerful throwing arm. He will catch approximately four games a week, Farrell said, with David Ross catching three. Ross will remain Jon Lester's regular catcher.

"I think he's a great young prospect," Ross said of Vazquez. "Love his attitude. He's got a cannon for an arm; you're going to see a kid that can really throw. I'm anxious to be a part of the catching corps with him. I think he's got the mentality.

"I'm happy," he said, a sentiment he expressed repeatedly. "I'm excited to be here to help the team to win. Very happy."

Pierzynski, who began his career in pro ball when Vazquez was 3, lasted just 72 games this season after signing a one-year, $8.25 million free-agent deal to replace Jarrod Saltalamacchia, who signed a three-year, $21 million deal with the Miami Marlins.

Pierzynski, whose defensive deficiencies were supposed to be mitigated by his bat, was having the worst offensive season of his career with the Sox, posting a slash line of .254/.286/.348/.633 with just 4 home runs and 31 RBIs.

While Pierzynski was batting just .194 since June 1 with no home runs and four RBIs, Vazquez has been on a hot streak for Triple-A Pawtucket. Over his last 10 games, he is batting .342 (13 for 38) with a home run, 3 RBIs, 9 walks and no strikeouts.

Boston's decision to designate Pierzynski is an indication that the Sox believe he has little or no trade value at this stage. The likelihood is that Pierzynski, who holds the major-league record for most consecutive seasons catching 110 or more games (12), will sign with another club as a backup once he clears waivers and can be signed for the $20,000 waiver price. The Red Sox will owe Pierzynski in excess of $3.6 million for the remainder of his contract.

"I think it's important to note that this, where we are today, is not pinning this on A.J. by any means," Farrell said. "We felt like there was a player ready to step in that we wanted to give valuable time this year as we move forward, and that's Christian, and that's where we started."

Brendan Hall and Kyle Brasseur of ESPNBoston contributed to this report.