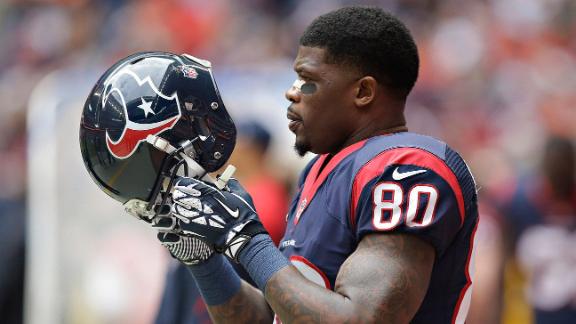 HOUSTON -- Texans wide receiver Andre Johnson has been given permission to seek a trade, according to sources.

After 12 seasons with Houston -- all of them as a starter and many as one of the best receivers in the NFL -- Johnson's role on the team was set to change. Rather than accept that, Johnson requested to be traded or released.

"It's business," Johnson told the Houston Chronicle. "I understand that side of it. I'm not angry about it. I knew at some point in time, this day would come. If we were living in a perfect world, you know I'd want to finish my career here, but, unfortunately, that's not what's going to happen. You just have to move forward. ...

"I don't know how you tell a guy who catches 85 balls that he'll only probably catch 40. I feel like the role they were trying to put me in I'd be held back from maximizing my talents. I feel like that was the best thing for both sides. Why sit there and be miserable when I can go somewhere else and be able to show my talents."

"Time has come," said Kennard McGuire, Johnson's agent. "It has been a great run, but as you know in the sports world, there is a shelf life. He looks forward to challenging for a Super Bowl."

The Houston Chronicle and KRIV earlier reported the news.

Despite being contractually bound to the Texans, Johnson took to Instagram to send a video message thanking Houston fans for the memories.

Johnson saw trouble ahead last year. He held out of the Texans' offseason workouts, organized team activities and mandatory minicamp, and arrived at the facility shortly before training camp began with the Texans' new coaching staff.

Throughout his absence, coach Bill O'Brien repeated the respect he had for Johnson. He did so again at the NFL scouting combine in February.

That didn't change, but Johnson's role was set to. The 2014 season saw Johnson's production dip as second-year receiver DeAndre Hopkins emerged. Hopkins notched his first 1,000-yard NFL season, while Johnson caught only 85 passes for 936 yards. In each of the previous two seasons, Johnson had caught more than 100 passes, for 1,407 and 1,598 yards.

Johnson is the longest-tenured player for the Texans, having been drafted third overall in 2003, the expansion franchise's second draft. Since then, he has become the best offensive player in the history of a franchise that lacked stability at quarterback. In his time with the Texans, he has caught 1,012 passes on 1,599 targets for 13,597 yards.

Teammates, including J.J. Watt and offensive lineman Duane Brown, took to Twitter to show their appreciation of what Johnson has meant to the Texans franchise.