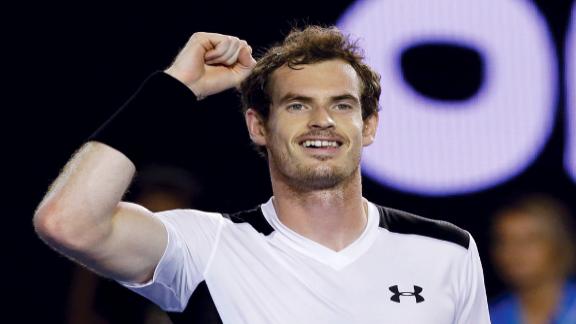 MELBOURNE, Australia -- Andy Murray spent a lot of time giving his box the business Wednesday in Melbourne. This for a guy who advanced to the Australian Open semifinals in four sets.

Murray's antics were so perpetual that it appeared he had become frustrated with his failure to come up with new forms of berating his camp.

At one point early in the encounter, Murray, a four-time runner-up in Melbourne, struck a magnificent running forehand around the post, only for Ferrer to respond with a lunging backhand volley into the open court. Murray, going into full irony mode, pumped his fist in celebration.

Nonetheless, the Scott prevailed in a draining 3-hour, 20-minute battle to make his sixth semifinal in Australia.

"Well, you want to try to get to the latter stages to give yourself opportunities," Murray said. "Obviously I want to win these events. That's why I'm still playing. After a tough year in 2014, I think I'm now sort of established again at the top of the game and giving myself chances."

After a routine opening set, the second was all-out carnage. In the tiebreaker alone, they had rallies that lasted 27 and 32 strokes, a microcosm of what the day had become. Ultimately, Ferrer won the 71-minute segment.

At this point, Murray had become even more agitated. During the changeover, he swatted away an ice towel one of the ball boys had attempted to wrap around his neck.

In the third, Murray finally got a break -- both literally and figuratively. With Murray up 3-1, play was suspended as the threat of lightning loomed closer. Nine minutes later, with the roof over Rod Laver Arena closed, Murray had settled down. With more time to strike the ball, he broke Ferrer once again to take a lead he never relinquished.

"You know, when the roof closed, I was obviously up a break in the third and was feeling good," Murray said. "That first game after the delay was a very important. I saved a couple of break points, but then actually played a good game. So it was nice to get through that game.

"Then I felt like started to play better as the match went on."

Murray, who said he was drained after his previous match against Bernard Tomic, showed good energy throughout Wednesday despite dissatisfaction with himself. He already had plenty on his mind with the impending birth of his first child and the collapse of his father-in-law, Nigel Sears, last week.

"Obviously last few days have been tough and maybe hadn't played my best tennis and managed to get through," Murray said. "Today I felt like at the end of the match I was playing some good stuff, moving well. Few things I could still do better for sure, but not easy circumstances today either with the changing of the conditions and warm-up for the match indoors then start the match outdoors and then changing back to indoors."

Murray and Johanna Konta, who earlier beat Zhang Shuai, ensured that two British players will be in the semifinals of a Grand Slam for the first time since the 1977 Australian Open.

For the record, of the 256 players who entered this year's main-draw singles event, not one was alive when that last happened.

That year, John Lloyd fell in the men's final, while Sue Barker didn't make it out of the final four. Another little slice of history? Murray and brother Jamie became the first siblings in the Open era to reach the semifinals in both men's singles and doubles in Australia.

"It's pretty good for us to have people competing in almost all of the competitions," Murray said. "Unfortunately, Jamie lost in the mixed today, but Gordon Reid had a great win as well today against the No. 1 in the world who they told me has only lost like once here in the last 10 years.

"So, yeah, it's been a good Australian Open so far. Hopefully we can keep it going."