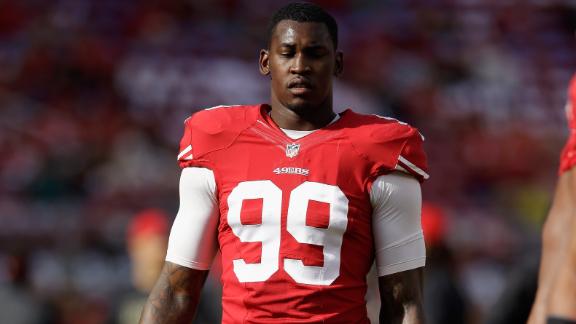 SANTA CLARA, Calif. -- Training camp practice for the San Francisco 49ers on Friday, hours after star outside linebacker Aldon Smith was released following his fifth arrest since 2011, had a somber but business-like feel to it.

The three players made available to the media following practice had the same message an emotional rookie coach Jim Tomsula imparted earlier in the day: The game was secondary to Smith, who has three DUI arrests among his brushes with the law, needing help.

"I'm just more concerned about him as a person," wide receiver Anquan Boldin said. "Football doesn't come into play when it comes to a situation like that. My whole thought is just making sure he's OK as a person."

Added strong safety Antoine Bethea: "Hopefully he gets some help."

And this from free safety Eric Reid: "It's tough. That guy might be the best pass-rusher in the league, but, like I said, it's more than about football right now."

Smith has not played a full 16-game season since 2012, when he racked up 19.5 sacks and helped the Niners make the Super Bowl. That followed his rookie season of 2011, when he had 14 sacks.

He missed five games while in rehab following a DUI arrest in 2013, although the 49ers allowed him to play less than 48 hours after that arrest. Last season, he had to serve a nine-game suspension handed down from the NFL for violating the league's policies on substance abuse and personal conduct.

This March, though, he bet on himself by restructuring his contract, turning his $9,754,000 salary into a series of bonuses.

He earned about $1.6 million of it before being cut.

His teammates swore they saw a change in him.

"He made huge improvements," Reid said. "He seemed like a different person, honestly, he did."

Asked how Smith had changed, Reid said, "His attitude. Just the way he talked. The way he interacted with people. He was making some real strides. So I think this is just an unfortunate situation to add onto some of the other things that have happened to him. But he's making progress, and I think that he'll come out on the good side of this."

Said Boldin: "He was looking the best I've ever seen. He was having a great camp.

"I think everybody was shocked. I wasn't here the entire offseason, but from what I gather, he's worked his butt off, and it looked that way when I got here. I think it was a shock to everyone."

Of course, there is also the question of who will step in for Smith. In the past, Dan Skuta proved to be a capable replacement, but he left as a free agent for the Jacksonville Jaguars.

In Friday's practice, Corey Lemonier ran with the first-team defense at Smith's old spot at right outside linebacker.

"That's a tough loss for us," Boldin said. "Aldon's a great football player.

"As a team, we have to move forward. We have no choice. And I think we'll get over it. We have some guys behind him that I think are capable of getting the job done."

"Aldon, as we all know, when he's on the field, he's something to reckon with. So whoever steps into his spot, they've got to step in and play well for us. ... We're a family here. So just like in any other family, when somebody goes down, we come together and make it stronger. And that's what we're going to do ... piggyback off one another, help each other, and we'll be fine."

Tomsula: 'He will not have to walk this path alone'
San Francisco 49ers coach Jim Tomsula discusses the release of troubled LB Aldon Smith.

Smith: 'Justice will be served'
49ers LB Aldon Smith says there was no DUI and the truth will come out.