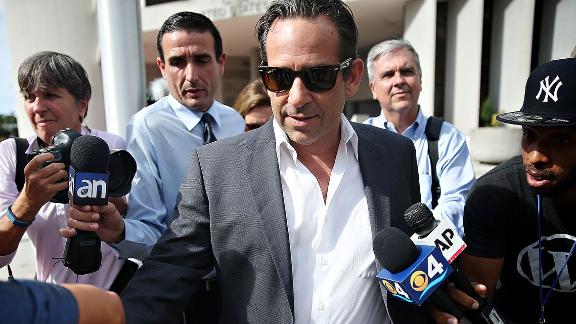 MIAMI -- Anthony Bosch, the former owner of a Florida medical clinic who posed as a doctor and illegally supplied steroids and other performance-enhancing drugs to professional baseball players and even high school athletes, was sentenced Tuesday to four years in federal prison.

Bosch -- who choked back tears in court and said the clinic was a legitimate business gone awry -- sought a more lenient term because of his cooperation in the investigation, but U.S. District Judge Darrin Gayles refused.

"This defendant was the most culpable in this conspiracy," the judge said.

Prosecutors said Bosch could get his sentence reduced through further cooperation, including potential trial testimony. Gayles said Bosch falsely held himself out as a licensed medical doctor at his Biogenesis of America clinic, where he accepted thousands of dollars a month to provide steroid injections to players such as New York Yankees star Alex Rodriguez and Ryan Braun of the Milwaukee Brewers.

Most troubling, Gayles said, was Bosch's injections of high school players in the Miami area.

"He was the mastermind," Gayles said. "He was the one who recruited others to assist him."

Bosch, 51, pleaded guilty in October to conspiracy to distribute testosterone, the sixth person charged in the Biogenesis case to do so. Bosch and Rodriguez are expected to testify if the last two defendants -- Rodriguez's cousin Yuri Sucart and ex-University of Miami pitching coach Lazaro Collazo -- go to trial as scheduled in early April.

MLB imposed a record season-long suspension last year on Rodriguez, one of 14 players penalized in the scandal. The Yankees say Rodriguez, 39, is no longer their third baseman but will have a chance to earn at-bats as a designated hitter.

Rodriguez issued a separate statement Tuesday, apologizing to Yankees fans for "the mistakes" that led to his 2014 suspension.

Bosch, who has been undergoing treatment for cocaine addiction since his guilty plea, was joined by more than two dozen friends and family members at his sentencing hearing.

"I'm ashamed of myself. I'm remorseful," Bosch said. "I can't put into words how sorry I am."

But Assistant U.S. Attorney Michael Sullivan said that rather than help people with medical problems, Bosch's main goal was to rake in money by illegally making the athletes "bigger, stronger and faster ballplayers."

Bosch liked to call himself Dr. T, according to court records.

Bosch lawyer Guy Lewis, a former U.S. attorney in Miami, said that without his cooperation, MLB would not have had sufficient evidence to sustain Rodriguez's suspension. Lewis said Bosch has met dozens of times with U.S. Drug Enforcement Administration agents and helped prosecutors pore over thousands of pages of documents.

That cooperation, Lewis added, came despite threats from unnamed people warning Bosch to keep his mouth shut, forcing him to hire security services and move to several different locations. Bosch was also offered $150,000 to flee to Colombia and "lay low," but he did not, Lewis said.

"Mr. Bosch has cooperated thoroughly and extensively," Lewis said. "He was truthful. He was reliable."

But Gayles refused Lewis' request that Bosch receive a lighter sentence of just under three years.

Information from ESPN's T.J. Quinn and The Associated Press was used in this report.