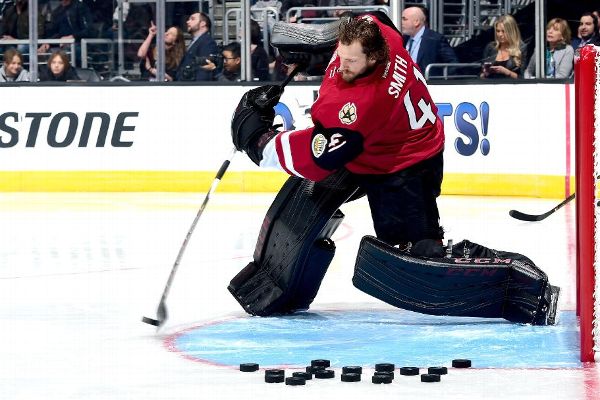 The towering Arizona goalie scored a 188-foot goal during the Four Line Challenge on Saturday night, and the 6-year-old son of Anaheim Ducks center Ryan Kesler scored on Montreal goalie Carey Price during the Shootout.

The Atlantic Division won the overall competition and chose to face the Metropolitan Division on Sunday in the second semifinal period of the All-Star Game, which was changed last year to a 3-on-3 tournament among teams from each of the NHL's four divisions.

NHL scoring leader Connor McDavid won the Fastest Skater competition, and Montreal defenseman Shea Weber had the hardest shot in the All-Star field for the third consecutive season, albeit with his lowest speed yet. Pittsburgh captain Sidney Crosby won the Accuracy Shooting competition, and he joined Weber and Boston's Brad Marchand as the only adults to score in the shootout.

The event ended with a shootout competition between the Atlantic and Pacific teams, but just four of the 20 skaters scored. One of them was Ryker, who beat the grinning Price five-hole and celebrated with a two-fisted pump that he learned from his All-Star dad, who filmed him on his phone.

"I was more nervous than him watching," Ryan Kesler said.

The best early moment belonged to Smith, who lived every goalie's dream when he shot a puck from the crease into a tiny slot at ice level in the middle of the far net. Before Ryker Kesler seized control of the shootout, Smith's goal was the most memorable moment of this relaxed Saturday afternoon of annual silliness preceding the game Sunday.

"I didn't really have a strategy," Smith said. "I was really focused on just hitting the board, but it kind of curled in at the last second, and I couldn't believe it, to be honest. I was just as shocked as everyone else."

Smith already showed off his shooting skills while scoring a goal into an empty net for the Coyotes in October 2013, but this one had much less margin for error.

"The look on (Vancouver All-Star) Bo Horvat's face when I looked over at him was pretty priceless," Smith said. "I'm sure mine was, too, to see it go in. But it was something I'll remember for a long time. My family was here to witness it, too, so they can believe me."

Smith's shot was the highlight of the Four Line Challenge, the newest addition to the Skills Competition. Essentially a version of the on-ice promotions all around the world that turn hockey into a variant of miniature golf, the NHL stars largely missed the tiny targets until Smith let loose with his stunner.

Ryker Kesler also got his dad's turn in the Four Line Challenge, but missed from mid-ice.

Turns out he was just getting warmed up.

McDavid, who's only 14 years older than Ryker, also added another honor to his rapidly growing list, easily beating his seven competitors in a lap around the ice to prove his superior speed. He beat Colorado speedster Nathan MacKinnon during their head-to-head race, but fell just short of Dylan Larkin's NHL speed record during his second lap.

The Edmonton Oilers captain will appear in his first All-Star Game on Sunday after missing last year's festivities due to a broken collarbone.

Crosby and Toronto rookie Auston Matthews only needed five shots apiece to hit the four targets in the Accuracy contest, but Crosby did it more quickly.