A's call up switch-pitcher Pat Venditte, who gives up walk-off in loss to Orioles 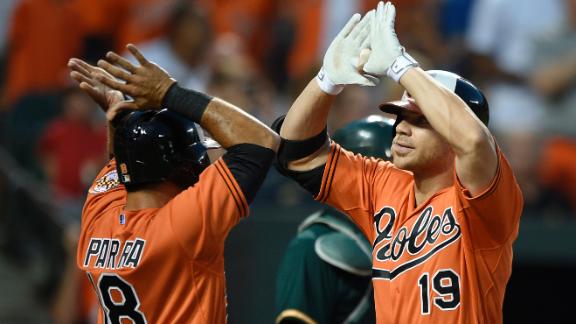 After the Oakland Athletics went deep into their bullpen Friday night in a 13-inning loss to theBaltimore Orioles, the A'srecalled ambidextrous pitcherPat Venditte and right-handerDan Otero from Triple-A Nashville.

For the second straight night, the Orioles gathered at home plate for a water-spraying, hand-slapping celebration -- this time with Venditte giving up the winning run.

Chris Davis hit two home runs, the second a tiebreaking shot with two outs in the bottom of the ninth inning off Venditte, to give the Orioles a 4-3 victory Saturday night.

"He's a great hitter, so right there you can't give him anything,'' the rookie said. "I gave him enough for him to do what he had to do.''

Venditte, who made his major league debut on June 5, became the first ambidextrous pitcher to play in the majors since Greg Harris in 1995.

Venditte made four appearances before going on the disabled list with a strained right shoulder.

Mills started for the A's on Friday night, his first appearance in the majors this season.