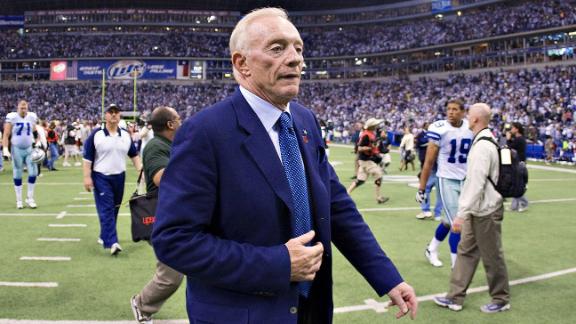 ESPN
By Todd Archer
IRVING, Texas -- Jerry Jones is fighting back against a former exotic dancer who filed civil suit against the Dallas Cowboys owner and general manager, claiming she was sexually assaulted.

"These allegations are completely false," Jones' attorney Levi McCathern said in a statement. "The legal complaint is unsupported by facts or evidence of any kind. This is nothing more than an attempt to embarrass and extort Jerry Jones. This is a shakedown by a lawyer who is a solo practitioner just trying to make a name for himself. The alleged incidents would have been more than five years old.

"We intend to vigorously contest this complaint and expect it will be shown for what it is -- a money grab. Due to the seriousness of these baseless allegations, we have also involved law enforcement."

According to the complaint, Jana Weckerly is seeking more than $1 million in damages. She claims Jones grabbed her breasts, forced her to touch his penis and watch another woman perform oral sex on Jones. Criminal charges were never brought against Jones and the civil statute of limitations in the allegations against Jones and the allegations of negligence against the Cowboys have expired.

Weckerly took the photos of two women in suggestive photos with Jones at a Dallas hotel that were detailed last month by the sports blog TerezOwens.com. Jones said the photos, which were from 2009, were a misrepresentation and that he had been aware of the photos for a long time. He declined comment when asked repeated follow-up questions.