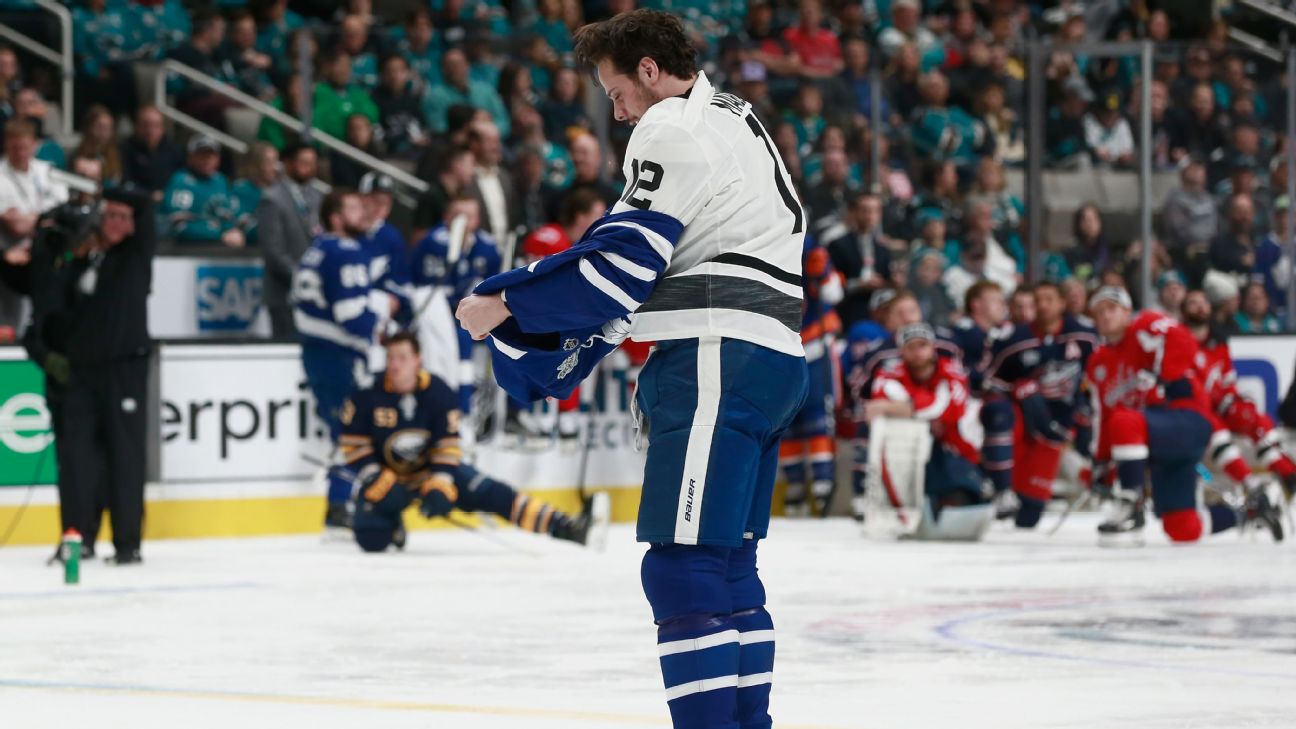 SAN JOSE, Calif. -- Auston Matthews skated out for his turn in the NHL All-Star shot accuracy skills competition Friday night. Unexpectedly, he began removing his blue Toronto Maple Leafs jersey, only to reveal he was wearing a second sweater underneath: an NHL All-Star jersey with a Maple Leaf on the front and the name and number of Patrick Marleau on the back.

The San Jose Sharks fans in the stands at SAP Center roared. Before Marleau became Matthews' teammate in Toronto as a free agent in 2017, he was arguably the most popular player in San Jose franchise history in a career that spanned 20 years.

"He spent a lot of time here in San Jose. We love having him in Toronto," Matthews said of Marleau, who scored 508 of his 546 career goals in 1,493 career games with the Sharks.

Matthews came up with the idea Thursday night for the tribute at dinner before Friday's NHL All-Star skills event.

"Luckily they were able to get a jersey made up for me," Matthews said.

He put it on during the lone intermission at the event.

"That was a good call, whoever told me to put it on later, because I was getting hot under there," he said.

As Matthews revealed the jersey to the crowd, the Jumbotron showed images depicting Matthews and fellow Leafs star Mitch Marner as the young children of the 39-year-old Marleau, which is a running joke among the Maple Leafs.

"I like to make fun of him and tease him that he's like a second dad to me, and he doesn't like that," Matthews said. "He's like a brother to me. We're extremely close -- myself, him and Mitch [Marner]. He treats everybody so well. It doesn't matter who you are: a random person on the street or a teammate that plays with him, he treats everybody so kindly."

Marleau's legacy lives on in San Jose, where former teammates such as Sharks captain Joe Pavelski were touched by the tribute.

"I absolutely loved it," said Pavelski, a teammate of Marleau's from 2006 until he left for the Leafs as a free agent. "I had no idea. [NBC's Jeremy Roenick] said, 'Do you know what he's gonna do?' I was like, 'This is great.'"

Pavelski and fellow San Jose All-Stars Brent Burns and Erik Karlsson skated over to Matthews for an on-ice picture.

"Of course, we should have turned him around. We just wanted the number on the back," said Pavelski with a laugh. "But it was pretty cool. Patty means a lot to just about everyone that's come through this organization. It was pretty cool of him to do that."

Matthews didn't alert Marleau to the tribute beforehand, as his family is vacationing in Turks and Caicos during the All-Star break. But Matthews did receive a thank you text from his teammate after coming off the ice.