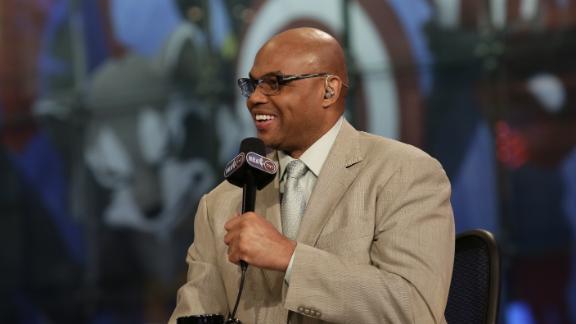 Charles Barkley took a social-media shot from Daryl Morey and returned fire with a vengeance Tuesday night, calling the Houston Rockets general manager "one of those idiots who believes in analytics."

The Naismith Hall of Famer and TNT analyst then disavowed the widespread use of the practice in sports, saying its proponents were "a bunch of guys who have never played the game, and they never got the girls in high school."

"First of all I've always believed analytics was crap," Barkley said on TNT's postgame coverage of the Rockets' 127-118 win over the Phoenix Suns. "You know I never mention the Rockets as legitimate contenders 'cause they're not. And listen, I wouldn't know Daryl Morey if he walked into this room right now."

Barkley made his case after saying the Rockets -- 36-16 and third in the West -- were poor on defense among playoff-contending teams despite being among the top statistical teams in the NBA defensively.

"Just because you've got good stats doesn't mean you're a good team defensively," Barkley said. "They're not a good defensive team. They gave up 118 points. No good team gives up 118 points."

Barkley's comments were in response to a tweet Morey posted during the Rockets' win.

Barkley offered up the previous championship models of the Los Angeles Lakers, Chicago Bulls -- with the pairings of Kobe Bryant-Shaquille O'Neal and Michael Jordan-Scottie Pippen -- and the current core of the San Antonio Spurs, with Tim Duncan, Tony Parker, Manu Ginobili and Kawhi Leonard, as evidence that using statistics was not a sound basis for building a winning NBA team.

"They say that same crap in baseball, and they put these little lightweight teams together and they never win," Barkley said. "They're always competitive to a certain degree and they don't win. It's the same thing in the NBA."

"The NBA is about talent," Barkley continued. "All these guys who run these organizations who talk about analytics, they have one thing in common -- they're a bunch of guys who have never played the game, and they never got the girls in high school, and they just want to get in the game."

An NBA coach, speaking to ESPN.com senior writer Ramona Shelburne, said there is value in the use of analytics but that it is limited.

"To say they've revolutionized everything about coaching or basketball is just wrong," the coach said.

The NBA coach said he uses analytics but that a lot of the statistics and formulas have been available for 10 years.

"You just had to look it up yourself on a computer," the coach said.

"These guys are bright, ambitious and a lot of them have carved out niches for themselves where they take credit for everything," the coach added. "You're taking people with a background in analytics. But they're out evaluating players and making decisions."

Barkley Rips Rockets GM For Being Stats 'Idiot'
Mike Golic and Mike Greenberg discuss analytics in sports and Charles Barkley's comment that Rockets general manager Daryl Morey is "one of those idiots who believes in analytics."

Barkley Bites Back At Rockets GM
Stephen A. Smith and Skip Bayless discuss Charles Barkley's statement that Rockets general manager Daryl Morey is "one of those idiots who believe in analytics."