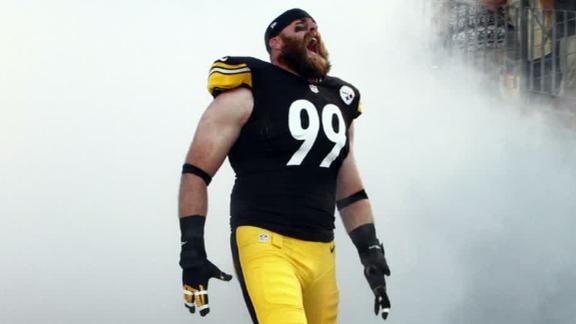 PITTSBURGH -- Getting younger on defense, a significant theme of the offseason for the Pittsburgh Steelers, didn't stop them from bringing back one of the more popular players in recent history.

The Steelers and veteran defensive end Brett Keisel agreed to a two-year contract on Wednesday.

Keisel had been an unrestricted free agent since March and was hoping to return to the Steelers for a 13th season. The Arizona Cardinals showed interest in Keisel after losing defensive tackle Darnell Dockett to a season-ending knee injury earlier this week.

That may have prompted the Steelers to finally bring Keisel back even though they have gotten younger at defensive end by signing free agent Cam Thomas to a two-year, $4 million contact and using a second-round draft pick on Stephon Tuitt.

Keisel is likely to play in a rotation at left defensive end with Thomas and Tuitt, as well as backup Cameron Heyward at right defensive end.

Keisel, who turns 36 in September, was a key player on the Steelers teams that won two Super Bowls and played in three of them from 2005-10. A special teams standout early in his career, Keisel became a starter in 2006 and was one of the stalwarts on a unit that consistently was among the top defenses in the NFL.

Keisel has served as a team captain each of the last two seasons, and he has garnered national attention with the bushy beard he has grown and shaved in the offseason for charity. "Da Beard" persona, along with his play, has made Keisel a fan favorite and one of the faces of the Steelers.