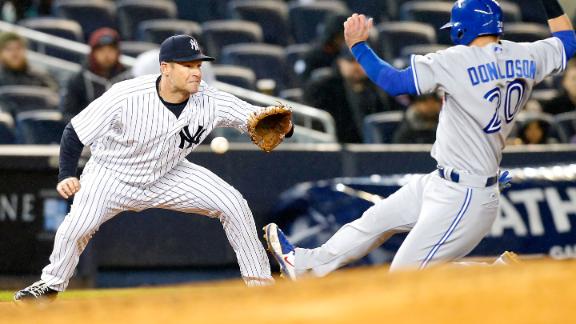 NEW YORK -- New York Yankees general manager Brian Cashman is as dumbfounded as any of the team's fans by the poor performance of his club through its first nine games of the 2015 season.


"Our defensive mistakes have been shocking," a clearly frustrated Cashman told ESPNNewYork.com on Thursday. "Our won-loss column has been affected by every aspect of the game. One night it's the defense, the next night it's the offense, then it's the baserunning. It all depends on which game you're looking at. We have not played consistent baseball at all, in any facet, and that's why we're 3-6."

The Yankees have lost each of their first three series of the season, to three of their American League East rivals: the Toronto Blue Jays, the Boston Red Sox and the Baltimore Orioles. The Yankees head to St. Petersburg for three games against the surprising Tampa Bay Rays over the weekend before continuing on to Detroit for four games against the red-hotTigers(8-1).


The Yankees are in last place in the AL East following two consecutive years in which they failed to make the playoffs, after having won the division in 12 of the previous 15 seasons.


They dropped the rubber game of the three-game series against the Orioles on Wednesday night when the bullpen, which had allowed just one earned run in its previous 9 2/3 innings, imploded for five runs in the sixth inning of a 7-5 loss.


But it has been the Yankees' play in the field that has been most disturbing to Cashman, who traded for shortstop Didi Gregorius and signed second baseman Stephen Drew and third baseman Chase Headley in the offseason in an effort to save some runs on the defensive side to compensate for a struggling offense.


But Drew and Headley have made two errors each, and Gregorius, who had a reputation as a superior defensive shortstop, has made one and easily could have been charged with another when he mishandled a routine grounder in Wednesday night's game.


In addition, Gregorius has made three glaring baserunning mistakes, including getting thrown out at third to end an inning on Opening Day, and suffered a brain-lock in Saturday's 8-4 loss to the Red Sox when he held a relay throw despite having an apparent play on a runner crossing the plate.


"Our defense has been overall poor, and we're better than that," Cashman said. "That's not what we are or what we will be."


Gregorius, who is hitting .172, is attempting to fill the void left by the retirement of Derek Jeter, but he insists he has not been affected by the pressure of replacing a player many Yankees fans consider irreplaceable.


"I'm not trying to follow in his footsteps," Gregorius said after Wednesday's game. "I'm not looking for any pressure like that. I'm only human and people make mistakes. Nobody's perfect. What more can I say?"


Manager Joe Girardi pointed to the 25-year-old Gregorius' youth and relative inexperience -- he is in only his third full big league season -- to explain his early-season struggles.


"It is the first time he has been an Opening Day starter," Girardi said. "There is an adjustment period for anyone who comes to New York. It is not the easiest position to handle, either. He is, in a sense, the captain of an infield and he has a lot of responsibilities. It's only been a week, too. That's why I don't make too much of it."


While Cashman downplayed Gregorius' mental error in Saturday's game, saying it was the responsibility of other defenders to tell Gregorius to fire home, he acknowledged seeing signs that Gregorius is pressing.


"He had a great spring, so I'm wondering if it's just a struggling stretch or is it an adjustment period coming out of Tampa?" Cashman said. "I don't know if he's trying too hard to make something happen out there. It looks to me like he's rushing at times. I can't really explain it."


Cashman said he was "encouraged" somewhat by the most recent outings of starting pitchers CC Sabathia, Masahiro Tanaka and Nathan Eovaldi, who allowed two earned runs in five innings on Wednesday, as well as signs of life coming from the bats of Carlos Beltran, Brian McCannand especially Alex Rodriguez, who hit a long solo home run in the fourth inning Wednesday night.


"But nobody wants to hear that you're encouraged," Cashman acknowledged. "The only thing people care about is wins, and right now we only have three of them. We haven't played up to our potential, but hopefully, we'll all of a sudden find our stride."