Brown steps up as an evolved coach in place of Kerr 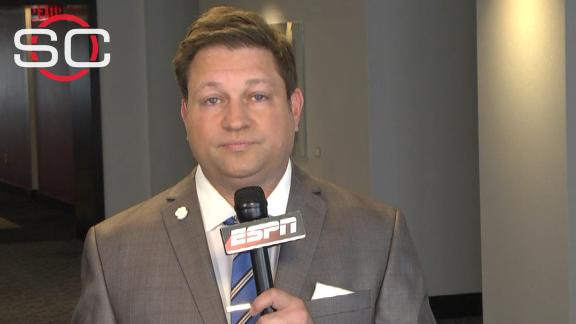 PORTLAND, Ore. -- Steve Kerr's influence on the Golden State Warriors will be felt no matter how much of the postseason he misses. He has coached everyone on this team, including the man who will take his place, Mike Brown.

Brown arrived in Oakland this year in place of Luke Walton, who rode his 39-4 record* (*the wins officially went on Kerr's tab) to a job with the Los Angeles Lakers. Brown found Kerr's coaching style to be a revelation. Kerr was so open, so receptive to his players that it made Brown think back to the way he ran things as head coach of the Cleveland Cavaliers and the Lakers and realize that he had driven his teams too hard. Now, he'd seen the light. When Brown met with the ESPN broadcast crew before Game 3 on Saturday night, after the Warriors announced Kerr was ill and Brown would take his place, Brown marveled about how much he had learned from Kerr even though Brown has coached more than twice as many NBA games as him. He vowed to coach as Kerr-like as possible.

There's some of the Spurs culture mixed in, as well. He was an assistant coach in San Antonio from 2000-03, and last year, he spent time around the team at Gregg Popovich's invitation, including during the playoffs. It's possible he has learned more in the past year, allowed to observe without being forced into action, than he did in his six total seasons in Cleveland or two with the Lakers. His time in L.A. came to an abrupt end five games into the 2012-13 season, after a slow start amid the heightened expectations brought on by the addition of Dwight Howard and Steve Nash. The Lakers rushed to bring in Mike D'Antoni, whose fast-paced offense was a bad fit for a team that Kobe Bryant described as "slow as s---."

He's not fazed by the moment or the magnitude of the playoffs. He neither panicked nor fumed while the Warriors trailed by double-digits through much of the first half in Portland on Saturday. He kept emphasizing that the game was about getting the most out of possessions. He started one huddle session with a shrug, as if to say these things happen when you don't adhere to the game plan. The players could see where they were failing. He didn't need to take his clipboard and bash them over the head with it.

It was more residue of the environment under Kerr. Earlier, Draymond Green sat with the ESPN crew and said, "The one thing Steve does with us is he empowers us as players."

The best example of that was the Warriors' 73-win season a year ago. Kerr let the players decide if they wanted to make the single-season wins record a priority, even if it meant stars playing in back-to-back games when the team's medical data suggested they take a rest. But it manifests in all sorts of ways, including Green waving off Brown's attempt to bring him out when Green picked up his second personal foul in the first quarter Saturday.

Another case of player power: the arrival of JaVale McGee. For all of his foibles, McGee had an advocate in Andre Igoudala, who played with him in Denver. Igoudala's words carry weight on this team and dispelled any reservations about McGee.

"I trust Andre as much as I trust any player," Warriors general manager Bob Myers said during the team's shootaround Saturday.

Stephen Curry, listening in from a seat a few feet away, chimed in: "Why would you do that?"

Myers continued on, loud enough for Curry to hear, that Curry's opinions don't mean anything and that he's only around for his shooting. It was a slice of a healthy relationship, a comfort level between the star player and the GM that allowed them to poke at each other even in the presence of the media. Behind it all is an understanding that credit gets shared. Kerr attributed the Warriors' success without Kevin Durant to the roster filled out by Myers. Myers says it's a byproduct of players' being attracted to a winning team, beginning with the decision by his predecessor, Larry Riley, to draft Stephen Curry. Kerr also credits the defensive mindset that began under Mark Jackson.

Meanwhile, the signing of McGee pays more and more dividends. He's been at his best in this playoff series, wreaking havoc on the small lineups from the Blazers, who were without center Jusuf Nurkic in the first two games and was available for limited minutes in Game 3. McGee had 15 points in 13 minutes in Game 2 and 14 points, four rebounds and a steal in 16 minutes in Game 3.

The Warriors love throwing alley-oop passes to McGee, and when he reached back to catch a wayward lob from Green and slammed it home during the third quarter, it energized the entire team. Not even a Portland timeout could stop their momentum, as they proceeded to score 15 of the next 16 points to turn a 12-point deficit into a slim lead.

Brown rewarded McGee with a couple of minutes of fourth-quarter playing time in a spot when the Warriors usually go with a smaller lineup. Brown made other alterations to the typical fourth-quarter rotation, leaving Green in the game after he played the entire third quarter.

"To make decisions like that, in a hostile environment, about to lose Game 3, and to do that, that was big time," Green said at the podium.

Brown has to make the in-game decisions for the foreseeable future. The same mindset that has kept Kevin Durant out of the past two games while he recovers from a calf injury will also lend them to err on the side of caution with Kerr. They don't want him to come back before he is ready to last for the duration. As jarring as it is to lose him two games into the playoffs, it would be even worse for them to bring him back, then lose him again.