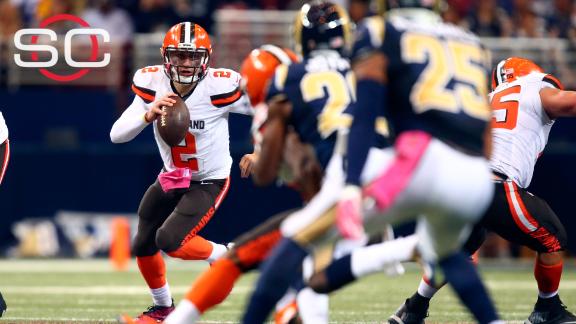 The Browns' only option, under the NFL's rules, was to make Manziel inactive for this past Sunday's game against the St. Louis Rams, Farmer said. Only the NFL has the authority to discipline Manziel, because the league investigates potential personal conduct policy violations.

Farmer said the Browns chose not to deactivate Manziel based on the information they had, deciding instead to inform the NFL, which began its own investigation.

Farmer spoke Tuesday at a luncheon fundraiser to benefit the Cleveland-area Domestic Violence & Child Advocacy Center. NFL executive vice president of football operations Troy Vincent was the keynote speaker at the event. Vincent grew up in an abusive family and has dedicated himself to being an advocate for victims.

Vincent did not have specific details about Manziel's situation or the investigation but said the NFL hires its own investigators who "are experts in the area of domestic violence, sexual assault and child abuse."

"Any time there's questions marks, we follow up," Farmer said. "Like I said in my statement, I had my conversation with Johnny. I'm not going to make that public. That conversation is private, and should be. He knows where I am, and I know where he is."

Manziel was involved in an argument with his girlfriend, Colleen Crowley, while driving on an interstate west of the city. Witnesses called 911 reporting Manziel was driving at a high rate of speed on the shoulder and pulling across several lanes of traffic.

After the vehicle exited the highway, Manziel parked in a driveway on a side street. Police arrived and questioned Crowley, who said Manziel hit her and pushed her face against the glass of the car while driving.

Manziel denied Crowley's allegations. Police determined Crowley was inebriated; Manziel admitted to drinking during the afternoon, but police did not think he showed signs of intoxication.

No charges were filed, and the couple was permitted to leave together. Manziel's interview with the league could take place as soon as Wednesday.

Vincent said the fact that no charges were filed does not factor into any possible league discipline.

"It doesn't matter," Vincent said. "That's one of the things that we learned [from the Ray Rice situation]. We have our investigators that are experts in the area of domestic violence, sexual assault and child abuse. We work with local authorities, but we're not leaving it as we have done in the past, years past.

"We now do our own independent [investigation]. One of the things that we learned and was recommended that we do is we have in-house people who are experts in that particular field that will conduct the independent investigation."

Vincent would not speculate on possible discipline, calling the investigation "a pending matter."

Soon after, Vincent gave an emotional and passionate talk to the gathered crowd in the Renaissance Grand Ballroom about his personal history growing up in a family where his father abused his mother over a period of eight years when he was between the ages of 7 and 15. He talked of knowing police dispatchers personally because he called so often and of walking into a hospital with his grandmother not recognizing his mother's face.

"My purpose in life," he said of 24 years of work in the field, "is to turn that pain into progress."

His reaction when he heard what had happened with Manziel?

"This is not to prejudge; there's a process that will take place," he said. "I think about the vicim. My mind goes to the victim.