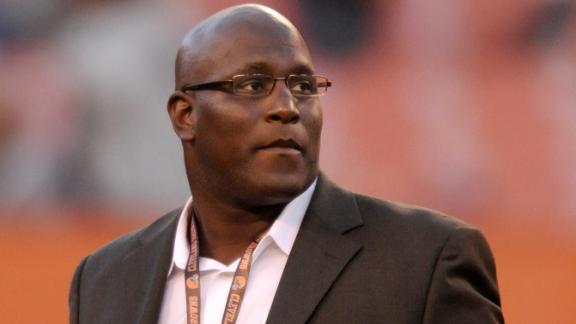 A suspension for general manager Ray Farmer, a loss of a draft pick and a fine for the team are among the possible sanctions the Cleveland Browns are facing in the NFL's investigation into allegations that texts were being sent to the sidelines during games, league sources told ESPN, confirming a report by Cleveland.com.

The NFL's findings in the investigation are expected by the end of this month andFarmer faces a multigame suspension, according to sources.

Texting is a violation of the NFL's rules prohibiting electronic communication during games.

Cleveland.com originally reported last month that the text messages from a high-level front office member were sent and said it was one issue in former offensive coordinator Kyle Shanahan leaving the team. He perceived it as interference from the front office regarding coaching decisions.

The website, citing multiple sources, reported that it was Famer that sent the texts.

A league source confirmed that Farmer was doing the texting, with most going to quarterbacks coach Dowell Loggains, who sat in the press box.

The texts did not necessarily deal with strategy, but with issues related to quarterback play, use of personnel and the second-guessing of play calls. The source had not seen the exact texts, but learned of them through people with the Browns.

Whether the texts represented a competitive advantage will be a key factor in the league's investigation. If the texts were determined to provide an advantage, it would be a more serious issue.

Coach Mike Pettine confirmed last month that NFL investigators had been to Cleveland to look into the allegations.

"The investigators came in here, and I spoke with them," coach Mike Pettine said on Jan. 22, declining further comment until the review is completed.

Owner Jimmy Haslam said later that day that the team was cooperating with the NFL on its investigation.

"If we did anything wrong, I'm sure we'll correct it and make whatever amends," Haslam said. "I know we've cooperated fully with the NFL."

Depending on the outcome of the investigations, at least two, and possibly three of these cases are expected to result in fines and a loss of draft picks, sources told ESPN's Adam Schefter.