Buddy Hield ejected for hitting DeMarcus Cousins in the groin 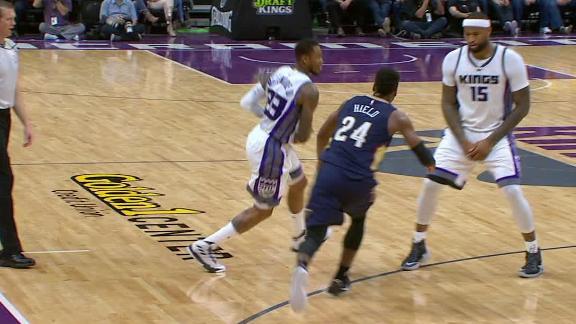 New Orleans Pelicans rookie guard Buddy Hield was ejected for the first time in his NBA career after he hit Kings star DeMarcus Cousins in the groin during Sacramento's 105-99 win Sunday.

Hield was given a flagrant foul 2, which results in an automatic ejection.

The incident took place in the second quarter while Hield was fighting around a screen.

After the game, Hield said there was nothing intentional about his hit on Cousins and noted that if Cousins had thought it was intentional, he likely would've gone after Hield.

"Nothing was intentional. DeMarcus sold it," Hield said. "Then on slow-motion [replay], it looks worse than it is."

The incident came after Cousins received a technical foul of his own -- his league-leading 17th of the season. Cousins picked up his tech for hitting Pelicans big man Donatas Motiejunas in the face while fighting for a rebound in the first quarter.

Cousins has already been suspended once for reaching the 16-technical-foul plateau. An 18th technical foul would trigger another automatic suspension.