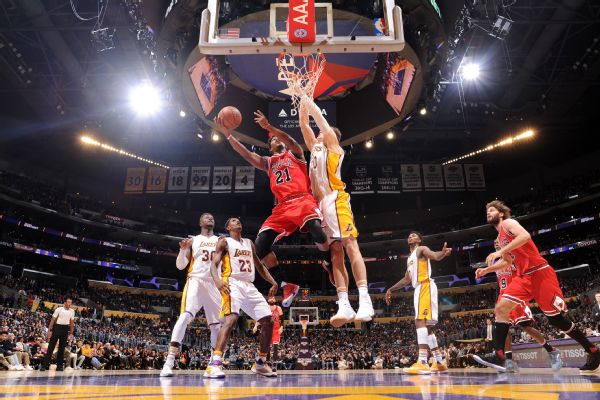 LOS ANGELES -- Jimmy Butler called his shot before Sunday's 118-110 win over the Los Angeles Lakers. The Chicago Bulls' All-Star swingman knew he would have to score more on Sunday with the Bulls playing without Dwyane Wade, who was sitting out the game to rest on the second night of a back-to-back.

So Butler, who is averaging 24.0 points per game this season, told his head coach, Fred Hoiberg, that he would take matters into his own hands as the Bulls tried to bounce back from a tough loss to the Los Angeles Clippers on Saturday night.

Butler finished the game with a season-high 40 points, going 14-for-23 from the field and 12-for-14 from the foul line. He also added seven rebounds and six assists in 40 minutes. In a month full of dominating performances, Butler saved his best game of the short season when his team needed it most.

"He is playing with a tremendous amount of confidence, and that's where it starts," Hoiberg said. "If you believe you can do it, that's a pretty good place to start. Jimmy thinks every time he steps on the floor he's the best player out there, and more often than not he's right. That's a big thing is the confidence and the belief in yourself, and he definitely has that."

Butler doesn't want to acknowledge publicly that he feels he is the league's best player, but that is the mindset he has taken with him on the floor over the past few weeks. He has scored at least 20 points in eight straight games.

"I think that's the way I have to think," Butler said. "If I don't, then I look at it as being just another player that's out there. My teammates tell me to play like that, to think like that, but at the same time even though D-Wade's out, he's still helping me through this process and letting me know what I should be doing. Late in the game, early in the game, it's great to have him in my corner."

As for his prediction before the game, Butler playfully smiled after being told of Hoiberg's words.

Butler's performance without Wade is even more impressive when compared to LeBron James' numbers while playing without the future Hall of Famer. As ESPN Stats & Information points out: "In 55 games LeBron played without Wade, he scored 40 three times. James didn't do it until his 14th game without Wade. Butler did it his first time out."

"I just felt like that's what my team was going to need from me to tell you the truth," Butler said. "For me to be aggressive, to put the ball in the basket, with our second-leading scorer out, I knew I had to pick up the pace a little bit. So that was my mindset. Play defense as well but go out and put the ball in the hole."

Butler's teammates figured that the 27-year-old was ready to have a big game.

"Before the game, before the ball jumped up, he came to me [and] just said, 'Come on, let's get it done,' " Bulls forward Taj Gibson said. "I saw it in his eyes, the desperation and understanding that we got to win this game. This is a big game for us, especially on a back-to-back after losing a tough one which we thought we should have won [Saturday] night, so I saw it in his eyes. He was intense, [Rajon] Rondo was intense, but he's just showing more leadership day by day."