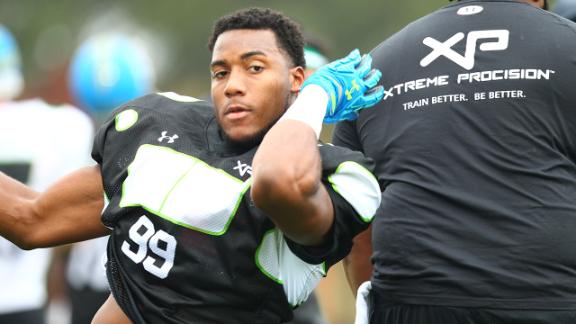 It took roughly seven hours filled with conflicting reports, miscommunication and some unusual behavior. In one of the more bizarre stories on signing day, the No. 1-ranked prospect in the ESPN 300 announced on national television Wednesday morning he would play for Auburn.

Three hours later, reports surfaced that he had yet to fax in his letter of intent. His Seffner (Fla.) Armwood coach, Sean Callahan, said Cowart arrived at school with two signed forms -- one for Auburn and one forFlorida.Callahan said he was given explicit instruction not to fax anything until the Cowart family gave him the go-ahead.

Cowart provided a different version of events, saying he only signed a letter of intent to Auburn and was just waiting to fax it in to make sure his "heart is there." Around 4 p.m. ET, Auburn confirmed it had received the signed letter.

What made the turn of events all the more confusing was the way Cowart responded to questions after he announced his decision. He answered each question confidently. Never did he appear to waver. Never did he express confusion.

Both he and his mother, Lacroria Wilson, had high praise for the Auburn football program, the campus, education and defensive coordinator Will Muschamp -- the swing factor in the decision to choose Auburn over Florida. It was Muschamp who persuaded Cowart to take an official visit to Auburn on Jan. 16.

During his interview session with reporters, Cowart said that official visit sealed his decision.

"It put the icing on the cake," Cowart said. "I was considering Auburn before, and it was a coincidence they got Coach Muschamp. I wasn't going to take a visit. He helped them to get me to take a visit. After that, I was able to see everything for myself, and I'm like, 'OK, so you guys were telling the truth.'"

Muschamp recruited Cowart when he was still the coach at Florida, and the two maintained a strong relationship after the coach left the Gators. Cowart discussed new Florida coach Jim McElwain and the staff at Florida as a reason he opted against going to Gainesville.

"It's not their fault they're new," Cowart said. "In the recruiting process, [coaches] tell you what you want to hear, and when you get there, everything switches. They knew it was just hard going with some guys I didn't really know, but I gave them the benefit of the doubt.

"They're great guys, and I talked to Coach Mac when I took my visit to Florida. I spent an hour with him before I left. I know he's going to get that program going. Florida's going to be on the rise. I knew in the back of my head I'm still going to have to see them in the playoffs because I know what's to come."

Cowart, a defensive end who registered 11 sacks and 21 tackles for loss as a senior, dominated the Under Armour All-America Game in early January, earning MVP honors. That performance opened up many eyes about what he has the potential to do in college.

"During the season, people were saying, 'You didn't show me you were the No. 1 player,'" Cowart said. "I was angry, and I was upset. There are some things I'm still upset about I have to prove in college. My immediate thing is to be consistent. That's why the All-America Game, I was trying to be high-tempo, high-motor every day. I have a big chip on my shoulder. I have a boulder on my shoulder, so I'm ready to get after it."