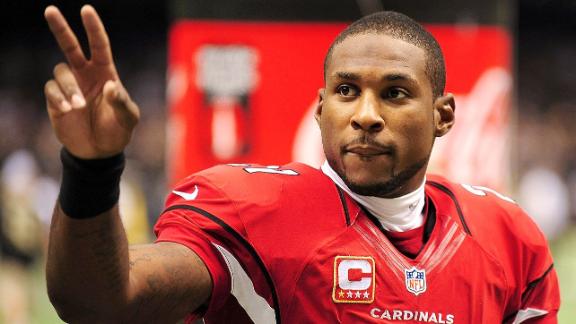 The Arizona Cardinals have agreed with Patrick Peterson on a five-year contract extension, a deal the Pro Bowler said Tuesday night is worth $70 million with $48 million guaranteed, which makes him the highest-paid cornerback in the NFL.

The team announced the extension, which will keep Peterson under contract through 2020, without specifying the pay.

- Patrick Peterson (@RealPeterson21) July 30, 2014Peterson's contract has been a topic of discussion through most of the offseason. Talk about an extension heated up since the Cardinals reported to camp on Friday. Reports the two sides were close to a deal swirled early Tuesday.

Peterson, who was selected fifth overall in 2011, became the first member of that highly successful first-round class to sign an extension.

As the first class to enter the league under the most recent collective bargaining agreement, the 2011 draftees face significant restrictions with their contracts. Each first-round pick was required to sign a four-year deal with an option for a fifth season. The Cardinals picked up Peterson's option in April, which set them to pay him a little more than $10 million next season.

Peterson, widely considered one of the top shutdown corners in the league, will hold a news conference Wednesday.

Peterson is a three-time Pro Bowler and a two-time All-Pro. He has 12 career interceptions but made his mark during his rookie season as a punt returner and tied an NFL record with four touchdowns. In his three years in the league, Peterson hasn't been to the playoffs, but he took on a role of Mr. Everything for Arizona and played offense, defense and special teams the past season.

In the process, he made NFL history by becoming the first defensive player since at least the 1970 merger to have a reception and completion in the same game. But the deal came two days after Cardinals coach Bruce Arians said he won't be using Peterson on offense anymore, which will leave Peterson to concentrate on defense while returning an occasional punt.

In addition to preparing to defend the opposing offense's top receiver, Peterson had to study punters and prepare for various types of kicks and coverages, and he had to learn which offensive plays he'd be part of. Arians said there were times the past season when it was tough to find Peterson on the sidelines for an offensive play.

"It wasn't hard, but it was just difficult, so now to finally get an opportunity just to play cornerback, it's just going to make my job that much easier," Peterson said Sunday.