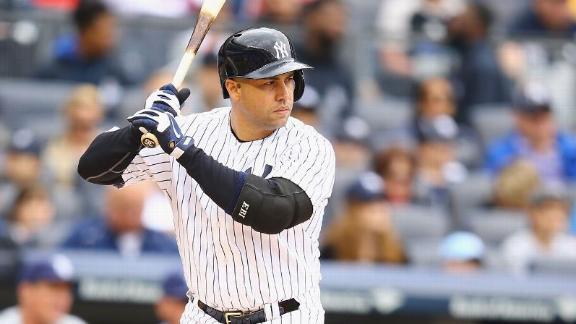 NEW YORK -- After missing three weeks because of a bone spur in his right elbow, Carlos Beltran returned Thursday to try to help the Yankees' struggling lineup.

"Everyone has to be responsible," Beltran said before the first pitch Thursday afternoon against the Oakland A's. "I hope I can help the lineup and make it better and score runs. I know right now we are going through a tough stretch. It is a long season. I know it is a long season and every game counts, but I think this team is going to hit."

Beltran has not thrown yet so he is will be used exclusively as a DH until he completes a throwing program. Beltran did not know when that would begin.

Batting fifth on Thursday, Beltran went 0 for 3 with two strikeouts as the Yankees avoided a three-game sweep with a 2-1 win.  He is batting .229 with five homers and 15 RBIs in 33 games.

After two cortisone shots and rehab, he feels comfortable swinging from both sides of the plate.Beltran said he doesn't feel any pain when he swings. When he goes through treatments, there is still a bit of pain.

"I would say it is like a hard stretch there," Beltran said. "But other than that I feel fine."

Beltran reiterated that he will have surgery in the offseason. To make room for Beltran, the Yankees designated Scott Sizemore for assignment. Sizemore will be on optional assignment waivers, which will allow the Yankees to return Sizemore to Triple-A Scranton without losing him.