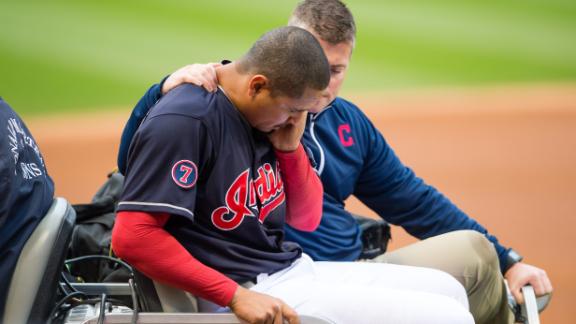 CLEVELAND --Indians starting pitcherCarlos Carrascowas treated at a hospital for a bruised jaw after he was hit in the face by a line drive from Chicago White Sox outfielder Melky Cabrerain the first inning of a 4-1 lossTuesday night.


Carrasco was flattened by the sharp liner that appeared to glance off his glove and right hand before smacking him on the right side of the face. The right-hander crumpled to the ground in front of the mound with his legs spread wide as manager Terry Francona and a trainer quickly raced out to check on him.

Following the game, Francona said X-rays and a CT scan on Carrasco were negative and he suffered only a bad bruise. Carrasco felt good enough to return to Progressive Field before the game ended. He'll be re-evaluated Wednesday.


"I heard a few minutes ago that he's OK," Cabrera said through an interpreter. "That's a relief. I feel better with that news. I was very concerned about him."


With his concerned teammates gathered around him, Carrasco stayed on the ground for several minutes. A visibly concerned Cabrera, holding his batting helmet, also came out to the side of the mound to check on Carrasco, while White Sox center fielderAdam Eatondropped to one knee at second baseand covered his face with his batting helmet.


Added Cabrera: "It was a very tough moment. It was real scary because it hit his face, but it's baseball. You can't control it once you hit the ball."


Indians trainers and coaches approached the mound, and the cart wasted no time emerging from behind the left-field wall. Carrasco walked to the cart with help from trainers after spending some time sitting on the mound, holding his face in pain.


Francona said Carrasco was not initially responsive when he was being checked. The trainers wanted to keep him as still as possible in case he had a neck or back injury. But after a few moments, Carrasco came around.


"It's scary, you know?" said Chicago starting pitcher Jose Quintana, who was forced to take the mound for the first time in the game shortly after watching the opposing starter leave the field on the back of the cart. "You never want that to happen to you or [anyone]. We hope that he is good now."


Zach McAllister took Carrasco's place as the Indians' pitcher and gave up one run and four hits in 3 innings.


"The game can be pretty scary sometimes, especially as close as the pitcher is to the ball and as hard as some guys hit the ball," right fielderBrandon Mosssaid. "It's definitely one of those things that makes you stop andremember that this game isn't all just fun. There's some danger in it and things can happen really fast."