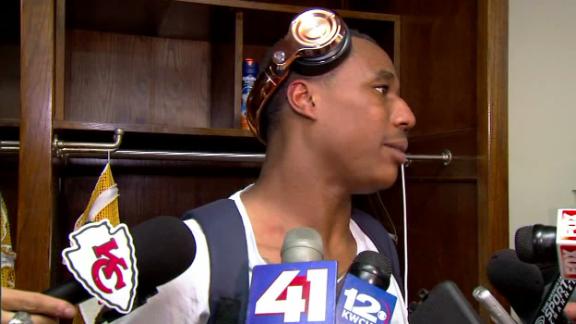 The Chiefs weren't alone in demonstrating during "The Star-Spangled Banner" on Sunday. The Seattle Seahawks also stood and interlocked arms. Their opponent, the Miami Dolphins, took another approach.

Dolphins running back Arian Foster told ESPN's Bob Holtzman that he planned to take a knee and raise his fist during the national anthem. Foster said Dolphins players met Friday and agreed to make their own decision on how to handle Sunday's anthem.

Foster, along with teammates Kenny Stills, Michael Thomas and Jelani Jenkins, took a knee Sunday, though it appeared Foster did not raise his fist as planned.

"We encourage all members of our organization to stand at attention during the national anthem out of respect and appreciation for the freedoms we are afforded as Americans. We also recognize that it's an individual's right to reflect during the anthem in different ways," the Dolphins said in a statement. "We respect these liberties and appreciate the sacrifices that everyone has made for our country, especially on this day of remembrance.

"We hope today's events will continue a respectful and thoughtful dialogue in our community on unity, inclusiveness and togetherness."

Foster said he has had conversations recently with San Francisco 49ers quarterback Colin Kaepernick. Peters said Friday that he was behind Kaepernick "100 percent," a stance he reiterated after Sunday's game.

"I'm black. I love being black, and I'm supporting Colin as far as what he's doing as far as raising awareness of with justice system," Peters said Sunday. "I didn't mean anything by it. I locked arms with my teammates. I talked to coach. Coach said it was OK if I wanted to express my thoughts about what I wanted to do.

"It's not about attention for me. Don't talk about it being about [that]. I come from a majority black community in Oakland, California. I grew up around my people a lot. The struggle I see, I've got family members who are still in the struggle."

In a statement issued on behalf of the players, the Chiefs said: "After having a number of thoughtful discussions as a group regarding our representation during the National Anthem, we decided collectively to lock arms as a sign of solidarity. It was our goal to be unified as a team and to be respectful of everyone's opinions, and the remembrance of 9/11.

"It's our job as professional athletes to make a positive impact on our communities and to be proactive when change is needed. Together we are going to continue to have conversations, educate ourselves and others on social issues and work with local law enforcement officials and leaders to make an impact on the Kansas City community."

Peters added that more steps need to be taken.

"We need to continue to meet as a team. I'll continue to do some things on my own back at home," Peters said. "We'll try to further help this problem. It's not going to do us no good if you all rush us talking about the same thing over and over."

Players from several teams, including the Green Bay Packers, Jacksonville Jaguars and Houston Texans, helped to hold the edges of giant flags at their games.

New England Patriots wide receiver Danny Amendola was one player who helped hold the flag, while teammates Martellus Bennett and Devin McCourty waited until the completion of the anthem to raise fists prior to their game Sunday night against the Arizona Cardinals.

"I believe in this country. I love this country," McCourty said. "My father was in the Army. My older brother was in the Army. Those men and women go out there and put their life on the line. I respect that. That's the reason why I didn't do anything during the national anthem because I respect it. You talk to people about how much respect they have for the flag. That's why they believe. That's why they go fight. Nothing but respect for that."

Kaepernick has been moved by the number of players around the NFL reaching out and supporting his decision to sit or kneel during the national anthem over the past few weeks in protest of racial oppression and other social issues.

Some players, including Seahawks cornerback Jeremy Lane and Denver Broncos linebacker Brandon Marshall have joined Kaepernick and his 49ers teammateEric Reid in kneeling during the anthem, though Lane stood with his teammates Sunday in a demonstration of unity. Others have discussed it, though Kaepernick said earlier this week that some have expressed concerns about the possible repercussions of joining the protest.

Several Seahawks player said they are in the process of meeting with the mayor of Seattle and police chiefs across the state.

"I think it's something that there's a lot of players that really feel the same way," Kaepernick said Wednesday. "They're just nervous about consequences that come along with it, and a lot of them have families to feed, and I think that's a tragic situation where players aren't comfortable speaking what's on their mind and what's right because they're afraid of consequences that come along with it. That's not an ideal environment for anybody."

Marshall has already experienced some of that blowback, losing an endorsement with the Air Academy Federal Credit Union on Friday after kneeling before Thursday's opener against the Carolina Panthers. On Sunday, a handful of NFL players apparently weren't deterred and joined Kaepernick in sending their message, even on the 15th anniversary of the Sept. 11, 2001, terrorist attacks.

Kaepernick and the Niners play Monday night, but he said earlier this week that he would have continued his protest had the 49ers played on Sunday, again emphasizing that his actions have nothing to do with disrespecting the military.

"Once again, this isn't a protest against men and women of the military," Kaepernick said. "I have great respect for them. I spoke with Nate Boyer and Joey Jones, those are great military vets, and I've spoken to others as well. People are getting lost in what the true message is and don't want to address what it really is and address those issues. That's really the problem. I wish people would be as outraged about the murders that are happening in the street as they are about a protest."

ESPN's Nick Wagoner and Mike Reiss contributed to this report.