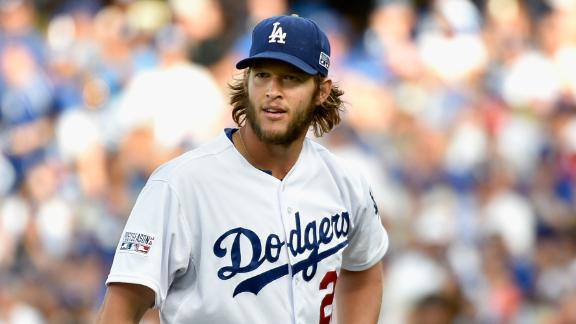 Mattingly, who revealed the decision before Game 3, made it sound like an easy call.

Kershaw was 21-3 with a 1.77 ERA during the regular season and is the presumptive Cy Young winner and, quite possibly, the NL MVP, but the St. Louis Cardinals hit him hard in the seventh inning of Game 1, when they overcame a four-run deficit and scored a total of eight earned runs off Kershaw. He threw 110 pitches in the game. The Cardinals also hit Kershaw hard in Game 6 of the past season's NLCS.

"It's Clayton Kershaw," Mattingly said. "I hate to say it like that, but these kinds of guys don't curl up and go away. You don't get where you are, win four ERA titles and end up going three out of four in Cy Youngs just by anything goes bad, you curl up and go away. These guys go to work. They come back. They keep working and they keep going. This is a different cat."

The Dodgers and Cardinals are tied at a game apiece going into Monday's game. Last year, Mattingly didn't make the decision to bring Kershaw back on short rest until after Game 3.

Kershaw made three strong postseason starts the past season, in addition to the bad one against the Cardinals. One of his good starts, Game 4 of the NLDS against the Atlanta Braves, came on three days' rest. He allowed three hits and two runs, neither of which was earned, in six innings in that game. The Dodgers won 4-3 and advanced to the NLCS.

Veteran Dan Haren had been scheduled to go in Game 4, but Mattingly said the team was planning to use Kershaw before the series began. They waited to see how he responded when he threw off flat ground Sunday before making the final call. Kershaw sounded game to get back on the mound and try to redeem himself against St. Louis.

"There's always something to prove," Kershaw said. "This game is very humbling. People don't care what you've done in the past. It's, 'What have you done for me lately?' People turn on you really fast, and I know that. For me, it's just the start-to-start thing. I try not to look at all the numbers and all the stats, just try to go out and try to win a game for us tomorrow."

Kershaw said he did not watch video of his seventh-inning meltdown in Game 1. Entering the inning, he had allowed just two hits, both solo home runs, but the Cardinals came up with four straight singles to start the seventh. The final blow was Matt Carpenter's three-run double. Kershaw made two regular-season starts against the Cardinals this season and went 1-0 with a 1.93 ERA.

He said he curtailed his between-starts routine in anticipation of pitching on fewer days' rest. According to Baseball Reference, pitchers working on three days' rest in the postseason have a collective 4.14 ERA, as opposed to a 3.64 ERA working on the traditional four days' rest.

Kershaw To Start Game 4 For Dodgers
Buster Olney breaks down the Dodgers' decision to start Clayton Kershaw in Game 4 of their National League Division Series against the Nationals.

Kershaw Set To Duel Miller In Game 4
The "Baseball Tonight" crew previews Game 4 of the National League Division Series between the Dodgers and Cardinals.