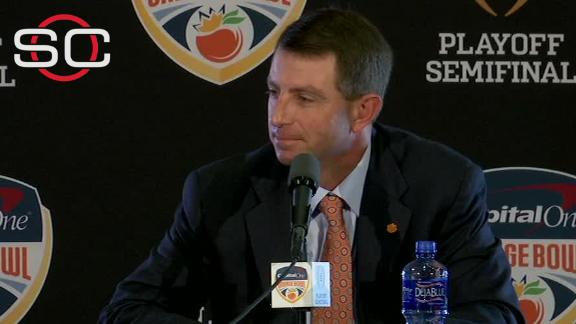 Cain, who has been the Tigers' biggest deep threat this season, kicker Ammon Lakip and tight end Jay Jay McCullough will not play in the Capital One Orange Bowl against the Oklahoma Sooners on Thursday or the title game if the Tigers advance.

According to multiple reports, they were sent home for failing drug tests.

"You don't do the right things, there's consequences," Clemson coach Dabo Swinney said at an Orange Bowl news conference on Wednesday. "It's really that simple. It's not a complicated matter at all.We've got 115 guys and 112 did what's right and three of them didn't. They forfeit the opportunity and privilege to be a part of the game. Really hate it for them. They're the ones that have to deal with the consequences because they're missing out on a great opportunity."

Lakip, who served a three-game suspension earlier this season for an offseason arrest for cocaine possession, handled some kickoffs and extra points. McCullough was a backup tight end behind starter Jordan Leggett.

All three are backups, but Cain is a significant loss. A true freshman, he stepped up when starter Mike Williams went down for the season with a neck injury in the opener and ranks second on the team with 582 yards on 34 receptions.

"It doesn't affect our team," Swinney said. "We had a great practice yesterday. This is just what I do. It's part of my job."

Cain missed the Miami game earlier this year because of a "coach's decision."McCullough's previous suspension was for team rule violations.

Swinney: 'If you don't do what's right, you ain't playing'
Clemson coach Dabo Swinney addresses the suspension of three players for the Orange Bowl, saying "at the end of the day there are consequences for your actions."