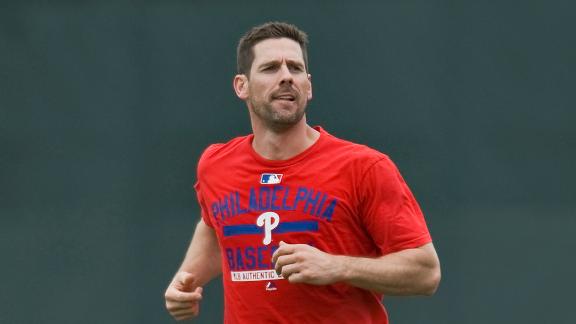 The Philadelphia Phillies have temporarily shut down Cliff Lee after the veteran left-hander felt renewed discomfort in his pitching elbow.

The Phillies announced Sunday that Lee, who started only 13 games last season due to an elbow strain, underwent an MRI on Friday.

The exam did not indicate any ligament damage, but the Phillies have decided to scratch Lee from his next scheduled spring start Tuesday. The former Cy Young Award winner is expected to resume throwing Monday, although the team stated that his throwing program will progress "as tolerated."

"We don't think it's acute, but we have to be cautious."

The Phillies also have sent the MRI results to renowned surgeon Dr. James Andrews for a second opinion. Andrews is expected to review the results either Monday or Tuesday.

Lee, 36, went 4-5 with a 3.65 ERA last year after pitching at least 200 innings in eight of the previous nine seasons. The four-time All-Star made his spring training debut last Thursday, allowing two hits in two innings.