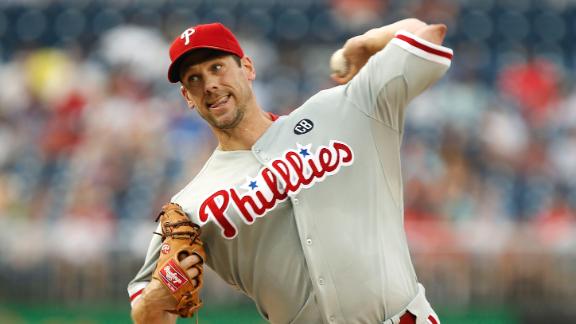 WASHINGTON -- Philadelphia Phillies left-hander Cliff Lee, making only his third start since returning from a left elbow strain, was placed back on the disabled list after leaving in the third inning of Thursday night's 10-4 win against the Nationals, the team announced after the game.

The Phillies said Lee had a recurrence of the flexor pronator strain that sidelined him in May. Lee told reporters after the game that he could possibly miss the rest of the season.

"At this point, that's probably the case," Lee said, according to MLB.com.

The 35-year-old will be examined by the Phillies team doctor Saturday.

After throwing ball one to Denard Span with two outs in the third, a frustrated Lee walked off the mound, looked into the Phillies dugout, and tapped his left arm with his glove hand.

Manager Ryne Sandberg and the team trainer came out, and Lee left the game, which was tied 0-0.

Lee indicated he felt discomfort while warming up before the game and during warm-up pitches before each inning.

"The last inning, it never fully went away and it came on a little stronger the next six or seven pitches I threw," he said. "It was there every throw and I just felt like if I kept throwing, something was going to snap, and I just wanted to make sure that didn't happen.

Lee was replaced by Antonio Bastardo.