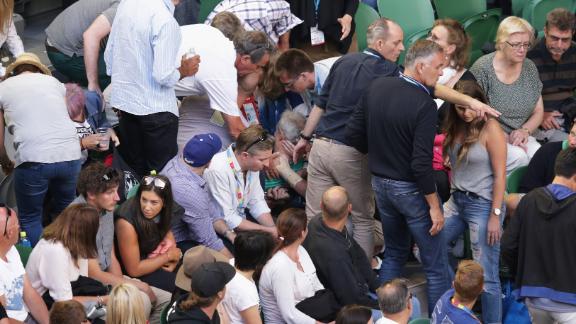 Sears, the father-in-law of Andy Murray, was leaving the courtside players box in Rod Laver Arena when he collapsed, according to reports. He was immediately put on a stretcher and treated with an IV and oxygen before eventually being taken down an elevator to an ambulance.

Jamie Murray, Andy Murray's brother, told Press Association Sport that Sears was "conscious, talking and sitting up." He was undergoing further tests at a hospital.

There was no official confirmation on Sears or his condition from the Australian Open, although Rod Laver Arena stadium announcer Craig Willis told the crowd: "Nigel Sears had a turn, as we all saw. He's in the hospital cracking terrible jokes he cracks all the time and a TV was wheeled into his room so he could watch the match. He's OK."

Sears' daughter and Murray's wife, Kim, is not in Melbourne. She is due to deliver the couple's first child in February and stayed in the United Kingdom.

ESPN analyst Pam Shriver said Sears, 58, had told other members of Ivanovic's coaching team that he wasn't feeling well about 30 minutes before the start of the match, which was won by Keys 4-6, 6-4, 6-4.

Ivanovic was unsure what had happened at first. But when she realized it was Sears, she sat in her changeover chair with an obvious look of distress.

Ivanovic and Keys waited on court for about 10 minutes before they were informed play was suspended and they left the arena.

The players later were given the option to resume play or postpone their match. Both agreed to continue. After a 50-minute break, the players re-emerged and the match resumed with Keys trailing 6-4, 1-0.

Ivanovic, who led 3-0 in the final set, waved to the crowd and immediately left the court after the match. Ivanovic declined the option to speak to reporters and instead issued a statement without addressing the incident involving Sears.

"Obviously it was a tough match," Ivanovic's statement said. "I played so well. First set, I won it. I felt like I produced some good games, created some opportunities. But she came back strong with a very powerful game. ... Obviously a little disappointed but a lot to look forward to."

Murray was playing simultaneously on Margaret Court Arena and also immediately left Melbourne Park without speaking to reporters after his 6-2, 3-6, 6-2, 6-2 victory overJoao Sousa. His match wasn't stopped, but word filtered through to Murray about his father-in-law as he finished.

Murray, like Ivanovic, issued a statement after the match that did not address the incident, saying only that the match "was tricky," that he "didn't feel great" and that it was "good to get through that one."

Sousa was the only one of the four players involved in the opening night matches who was available to comment on the episode.

"I just heard that Andy went direct to the hospital. Good thing is [Sears] is conscious, he's speaking," Sousa said. "So we hope there's nothing bad and, of course, first is the family and the health, so I think it's very good that Andy went there to be with him."

In her last match, Ivanovic had to wait for 30 minutes while a medical team attended to an elderly woman who took a tumble down the stairs.

Keys had 52 unforced errors in the match, but the American returns to the second week in Australia for the second straight year. In 2015, she reached the semifinals before running into eventual champion Serena Williams.

"A little bit of a slow start in the third," Keys said in her statement as she also declined to speak to the media and didn't address Sears' collapse. "I managed to kind of get it back and figure it out, fight back and get the win."

Said Ivanovic's statement: "I thought the third set she served better than me. She could get more on the first shot because of the serve. I felt that was the big difference in the third set."

Keys will play the winner of theVarvara Lepchenko-Lara Arruabarrena match.

Information from The Associated Press and Press Association Sport was used in this report.