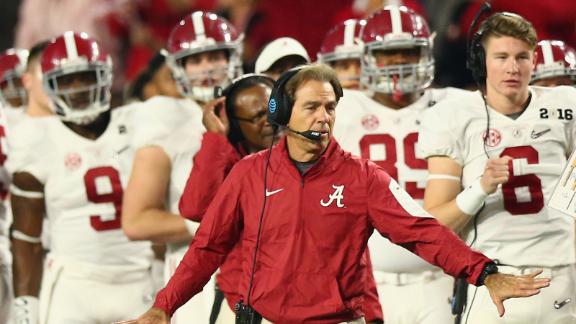 The preseason Amway Coaches Top 25 poll forecasts the 2016 campaign exactly like the previous season ended: Alabamaat No. 1, followed by Clemsonat No. 2.

Alabama, coming off of its fourth national title in the past seven seasons, tops the preseason poll for the third time, receiving 55 first-place votes from the 64 FBS head coaches polled. Clemson, earning its highest preseason Coaches Poll ranking by six spots, had seven first-place votes.

The other first-place votes went to No. 4 Florida Stateand No. 10 Tennessee, which is aiming for its first national title since 1998. The Vols enter the top 10 of the Coaches Poll for the first time since Oct. 29, 2006.

Oklahomacomes in at No. 3 after winning the Big 12 and reaching the playoff behind quarterback Baker Mayfield, who returns this fall. The Ohio State Buckeyes, despite losing 12 players to the NFL draft, begin the season at No. 5.

LSU, Stanford, Michigan, Notre Dameand Tennessee round out the top 10. Michigan will begin the season in the top 10 for the first time since 2012.

Defending Big Ten champion Michigan Statecomes in at No. 11 after reaching the playoff semifinals last year.