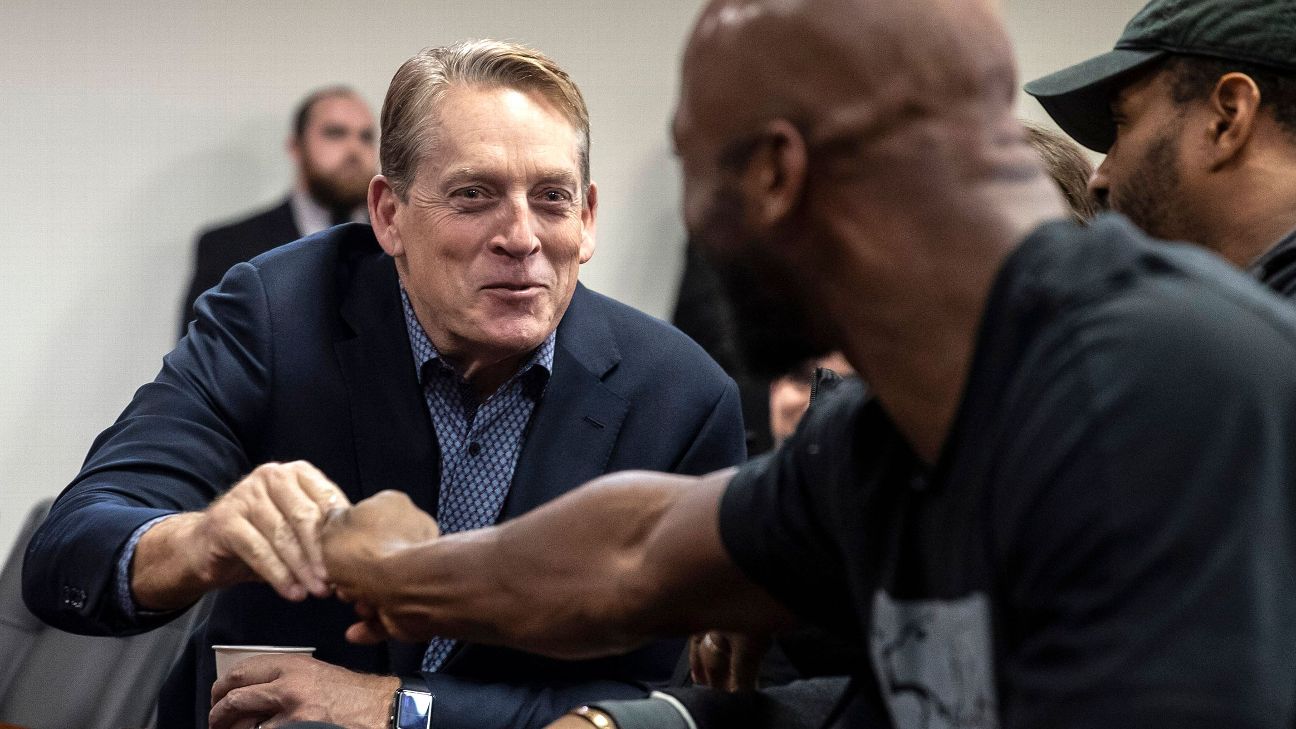 While NFL teams prepare for the offseason churn of players between free agency and the 2020 NFL draft, changes have been made to 17 of the league's coaching staffs.

In an effort to take stock of all the coaching movement, particularly the changes in primary coordinators, NFL Nation reporters have focused in on the new faces and what they bring to each team.

In the event no changes were made among each team's four primary coaches -- and there are 15 such teams -- we still have you covered by refreshing each team's main staffing list and tallying up the number of combined years of NFL coaching experience.

The quarterback position will be most affected by Gailey because ... : of the veteran coach's ability to quickly teach a digestible spread scheme, and that specifically refers to the signal-caller. Expect a scheme that is friendly for an athletic quarterback (Ryan Fitzpatrick/Tua Tagovailoa combo, perhaps?), one that welcomes three- and four-receiver sets and one that allows a young roster to play freely and avoid confusion.

Dolphins cornerback Nik Needham will be most affected by Boyer because ... : he was hand-picked by the recently promoted defensive coordinator as an undrafted free agent to develop in Miami last season, and Boyer is on his way to turning Needham into his latest success story. Boyer specializes in getting the most out of young, undiscovered talent, as he did in turning Needham into a starter last season.

Browns quarterback Baker Mayfield will be most affected by Stefanski because ... : of the scheme he will install, which figures to include easier passes than Mayfield was asked to complete last season.

The Browns' secondary will be most affected by Woods because ... : of the experience he brings. Woods' 49ers defense last season topped the NFL in fewest yards allowed per passing attempt (5.92).

Mayfield, again, will be most affected by Van Pelt ... : because of the rapport Van Pelt has shown he can develop with quarterbacks, which includes Aaron Rodgers in Green Bay.

The defense as a whole will be most affected by Weaver because ... : of his attention to detail. Weaver focuses on technique, and that has helped several defensive linemen whom he has coached, including nose tackle D.J. Reader.

Four words that describe Weaver: Teacher of the game

Jaguars quarterback Gardner Minshew will be most affected by Gruden because ... : Gruden has a track record of helping a young quarterback grow. Gruden's first season as Cincinnati's offensive coordinator coincided with Andy Dalton's rookie season, and Gruden helped Dalton increase his passer rating each season. Dalton's touchdown numbers grew each season too, and he threw for a career-high 4,293 yards and a career-high 33 TDs in 2013. That was Gruden's final season with the Bengals, and Dalton hasn't topped 25 TD passes in a season since. The Jaguars haven't announced whether Minshew or veteran Nick Foles heads into the offseason as the starter, but Minshew did finish the 2019 season in that role and won more games and had a higher passer rating than any other NFL rookie QB (Daniel Jones, Kyler Murray, Dwayne Haskins).

Combined years of NFL experience among the three coaches: 31

Broncos quarterback Drew Lock will be most affected by Shurmur because ... : Lock's development has been put directly into the hands of Shurmur as well as quarterbacks coach Mike Shula. Shurmur's 10 years of experience on Andy Reid's staff in Philadelphia, as well as developmental history with young quarterbacks such as Donovan McNabb, Nick Foles and Daniel Jones, should give Lock the kind of no-nonsense sounding board he needs.

The offense will be most affected by McCarthy because ... : while Moore will be the playcaller, McCarthy will influence the game plans and in-game decision-making. That move should help Moore, who is still learning on the job.

The pass rush will be most affected by Nolan because ... : takeaways matter most in the NFL. When you don't have players who have a knack for taking the ball away, you have to create opportunities by attacking quarterbacks. Nolan has shown a willingness to be aggressive and creative in other spots, which has allowed his defenses to take the ball away certainly more than Dallas has in recent years.

This special teams will be most affected by Fassel because ... : the Cowboys were among the lowest ranked in several special-teams units in 2020. By hiring Fassel, the Cowboys made a commitment to special teams, but now they have to carry it through with how they formulate the roster and continue to not make the group an afterthought.

Giants quarterback Daniel Jones will be most affected by Garrett because ... : the second-year signal-caller will have to learn a new scheme and language in a completely different offense under the veteran coach.

The Giants' young defensive backs will be most affected by Graham because ...: the group, from DeAndre Baker, Corey Ballentine and Sam Beal to Jabrill Peppers, was overmatched as a whole last season, but Graham's reliance on man-to-man coverage will be welcomed.

Four words that describe Garrett: Back to calling plays

Four words that describe Graham: A lot of unknown

Eagles quarterback Carson Wentz will be most affected by Taylor's promotion because ... : it brings a trusted voice further into the planning process. Wentz is tight with Taylor, who will remain quarterbacks coach while taking on some of the responsibilities that belonged to offensive coordinator Mike Groh before Groh was fired in January. Taylor and Wentz are typically on the same page, which should make for a relatively smooth process when constructing a plan of attack week to week.

The Eagles' offense will be most affected by Scangarello because ... : he will provide some of the fresh ideas Philadelphia is looking for on that side of the ball. Scangarello coached QBs under 49ers head coach Kyle Shanahan.

The culture around the Redskins will be most affected by Rivera because ... : he will provide discipline and order that has been lacking in the organization overall -- and something the players have wanted. He is also intent on stopping the leaks from within, though those almost always come when the team starts to lose and coaches or players become disgruntled by odd decisions.

The Redskins' defense will be most affected by Del Rio because ... : it will be switching to a 4-3 base scheme after a decade in a 3-4. Also, Del Rio made it clear that the communication issues of the past few years made the Redskins difficult to watch and that must change.

Redskins quarterback Dwayne Haskins will be most affected by Turner because ... : he will have to learn a new offense and new terminology, but once he does, the play-action game down the middle of the field could suit him well.

The Bears' offense will be most affected by Lazor and Ragone because ... : the two veteran coaches should serve as a better support system for Nagy, who calls the plays. Nagy probably took on too much responsibility last season as Chicago's offense floundered (for much of 2019) under quarterback Mitchell Trubisky. Look for Nagy to delegate more authority -- in terms of play design and game plan -- to Lazor and Ragone.

The Lions' secondary will be most affected by Undlin because ... : that's where most of his experience comes from -- be it in Cleveland, Jacksonville, Denver or Philadelphia. Undlin worked with Pro Bowl safeties in Philadelphia and Denver and his specialty is within that unit, and it seems like the logical place for him to benefit Detroit since it's unknown if he'll be calling plays.

The Lions' special teams will be most affected by Coombs because ... : he's going to be aggressive, but it might be affected more by change since punter Sam Martin is likely heading to free agency and long-snapper Don Muhlbach has yet to make a decision about whether he will play another season.

Vikings quarterback Kirk Cousins will be most affected by Kubiak because ... : there will be continuity on offense and the Vikings ran Kubiak's offense last season. Now, Kubiak will call the plays.

The Vikings' defensive line and linebacker Eric Kendricks will be most affected by Patterson and Adam Zimmer because ... : Minnesota generated the fifth-most sacks last season (tied with San Francisco) and has always been one of the better D-lines in the NFL. With Patterson as co-coordinator, this unit will continue to be the bread and butter of the defense. Kendricks, meanwhile, led the league with 12 passes defended last season. He took his coverage skills to another level, and having Zimmer, who has been his position coach for the past five seasons, as his co-defensive coordinator will continue to elevate his game.

The Falcons' secondary will be most affected by Morris because ... : a lot of Morris' background is tied to the secondary, and he was moved from wide receivers coach last season to work with the defensive backs, and it made a significant difference in the second half of the season. The fact Morris worked on both sides of the ball allows him to give the defensive backs a perspective of exactly what to expect from a wide receiver. Morris is big on fundamentals and technique, and that's crucial with the development of young corners such as Isaiah Oliver and Kendall Sheffield. Morris should help elevate the play of the defensive line while calling the defense.

The entire Panthers organization will be most affected by Rhule because ... : you can't narrow it down to a player or unit with Rhule because his process requires everyone buy in to all the little things that lead to success. That strategy is at the core of what earned him the reputation for rebuilding programs at Temple and Baylor and made him a hot NFL commodity.

The Panthers' quarterbacks will be most affected by Brady because ... : of his innovative ability to simplify the offense and get the ball into the hands of the team's playmakers -- regardless if it's Cam Newton, Will Grier or a quarterback to be named later.

Linebacker Shaq Thompson will be most affected by Snow because ... : with the retirement of veteran Luke Kuechly, it will be up to Thompson to take over the loss of the defensive leadership. Snow will assist in that effort and he'll need others to follow.

Four words that describe Rhule: Believe in the process

The Rams' offense will be most affected by O'Connell because...: his arrival will provide assistance and creativity in putting together the weekly game plan and will reduce McVay's workload to allow him to focus on managing the entire team. Don't forget, McVay spent the past two seasons without a full-time offensive coordinator.

The Rams' defense will be most affected by Staley because ... : he will have big shoes to fill following the departure of Wade Phillips, and he will have much to prove in his first gig as an NFL defensive coordinator.

The Rams' special teams will be affected by Bonamego because ... : he will be motivated to create his own identity and a culture that players will buy into after the departure of Fassel, who motivated his players in a way that most said they had never been inspired before. 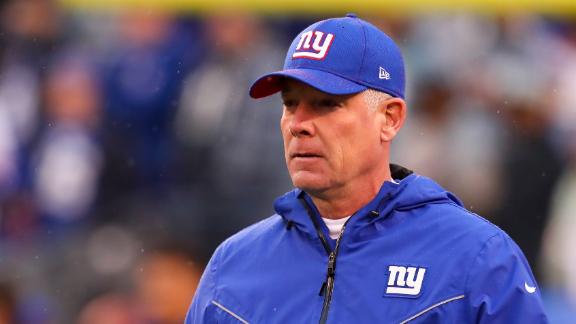 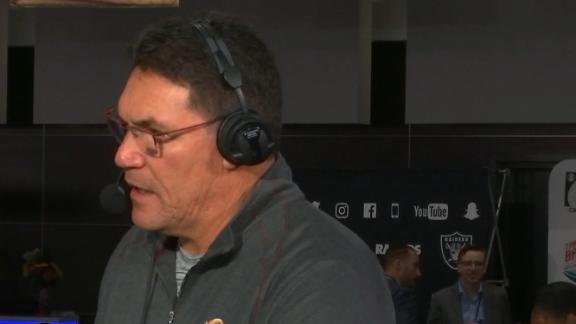 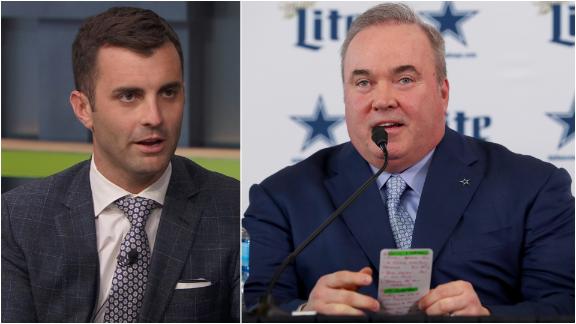