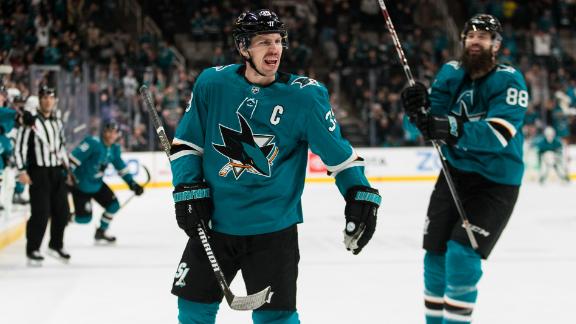 ESPN
SAN JOSE, Calif. -- Another day and another emotional San Jose Sharks overtime victory. And once again, Logan Couture was right in the middle of it.

Couture scored in overtime for the second straight game, giving the Sharks a 2-1 win over the streaking New York Islanders on Saturday night.

Couture scored at 2:30 of the extra period to lead the Sharks to their eighth win in nine games.

Couture, who had the overtime winner in Thursday's 2-1 victory over Vegas, extended his point streak to six games with three goals and seven assists over that stretch.

The Sharks' captain scored his fifth goal on a one-timer from Evander Kane on Saturday.

"Those are two plays where I'm just kind of in the right place at the right time," Couture said. "Kaner made a great play tonight and we found a way to win."

Casey Cizikas scored and Semyon Varlamov finished with 24 saves for New York, which extended its franchise record by earning a point in its 17th straight game (15-0-2).

"We're right in it now after a horrendous start," Couture said. "We've given ourselves an opportunity to make a push here and collect more points, so I think that's enough motivation right there."

Marcus Sorensen also scored and Martin Jones stopped 27 shots for San Jose. The Sharks tied an NHL record with their 43rd straight win in games it allowed two goals or fewer. The streak, which dates back to March 10, 2018, matches a mark set by Pittsburgh from Feb. 21, 2012 to Oct. 17 2013,

Sorensen got the game's first goal at 6:38 of the second as he tipped a pass from Mario Ferraro for his fourth goal.

The Islanders tied it 27 seconds later when Cizikas tipped Adam Pelech's shot from the point for his fourth. San Jose challenged the play for goaltender interference, but the goal was upheld.

The Islanders were 0 for 6 on power plays against the NHL's best penalty-killing unit.

"I think we could've been smarter and not take as many penalties as we did, but we found a way, and been kind of the story lately," Sharks coach Peter DeBoer said. "We've been dealing with some injuries and some depth issues, we didn't help ourselves tonight by getting in the box, but we still found a way and I thought it was a pretty gutsy effort."

New York didn't get a shot on goal until Devon Toews' wrister from eight feet out at 6:46 of the first. New York was held to seven shots in the first.

The Sharks took the game's first eight shots on goal but were outshot 28-26.

"The first five minutes they came at us pretty hard," Islanders coach Barry Trotz said. "I thought we settled in after that. For the rest of the game I thought we played pretty well.

"It really came down to that one play at the end. They have the No. 1 (penalty-kill) in the league for a reason. They put a lot of heat on you. They take away a lot of your options. They jam you up in small spaces and jump. I thought we adjusted to that as the game went on and we kept adjusting to their game. We were trying to get a little more zone time and some more looks but we couldn't, but it came down to just that one play at the end."

Game notes
Sharks C Tomas Hertl (lower body) was out of the lineup for a second straight game. San Jose's second-leading scorer sustained a blow to his right knee in Anaheim on Nov. 14, when he scored in his fifth straight game. ... The Sharks recalled F Noah Gregor from their San Jose AHL affiliate.They placed Dalton Prout (upper body injury) on injured reserve.

Islanders: At Anaheim on Monday night.