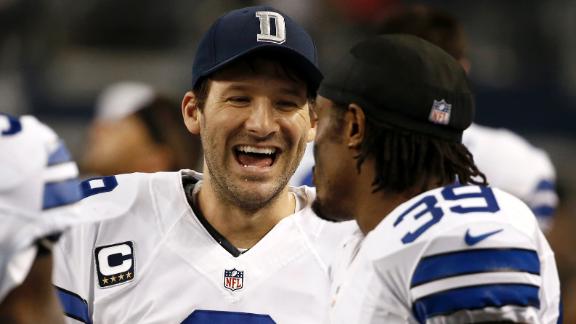 ESPN
By Tim MacMahon
ARLINGTON, Texas -- After claiming their first division title since 2009, the Dallas Cowboys started making a case for quarterback Tony Romo as the NFL MVP.

"He certainly is in my book," owner and general manager Jerry Jones said Sunday after the Cowboys clinched the NFC East title with a 42-7 rout of the Indianapolis Colts, keyed by Romo completing 18 of 20 passes for 218 yards and four touchdowns. "He is for me.

"Yes, he is, because [DeMarco] Murray has certainly carried his share, but Tony's quarterbacking this year was indispensable. We couldn't have had the team, and we have a team that probably right now is in the top four or five teams in the league. That's pretty good qualification of the vote."

Despite managing a surgically repaired back, Romo leads the league's quarterbacks in completion percentage (70.3), yards per attempt (8.49) and passer rating (114.4).

Romo has thrown for 3,406 yards with 32 touchdowns and only eight interceptions, leading the Cowboys to an 11-3 record in games that he has played.

Romo has been at his best during the Cowboys' December drive to the division title. Dallas is 3-0 this month in large part due to Romo completing 79.2 percent of his passes for 688 yards and 10 touchdowns with no interceptions.

On Sunday, he alsosupplanted Hall of Famer Troy Aikman as the Cowboys' all-time passing yards leader.

That, in the opinion of Jones and Romo's two most prominent pass catchers, is a pretty convincing MVP case.

"Hell yeah, he is. He's the MVP," said receiver Dez Bryant, who caught his 14th touchdown pass of the season Sunday. "Look at the performance. He's giving 'em hell in December. Icing on the cake. Give it to him. He's doing a hell of a job."

Murray, the NFL's rushing leader with 1,745 yards, has also been mentioned as an MVP candidate. However, the award has gone to a quarterback in six of the last seven years.

Five-time MVP Peyton Manning of the Denver Broncos, two-time MVP Tom Brady of the New England Patriots and one-time MVP Aaron Rodgers of the Green Bay Packers are other quarterbacks who must be considered worthy candidates this season.

The Cowboys firmly believe that Romo's performance in 2014 has put him at the front of that class.

"He's got to be up for it," tight end Jason Witten said. "I know there's other quarterbacks that have played well. We're a little bit biased, but if you take that first game out of the season and really the first half, he's been remarkable the way he's done it.

"He just makes big play after big play, and he creates a lot of those. I definitely think it's his best season. His name needs to be mentioned. I know some of those other guys have played well, but with this team and what he's done, he would get my vote."

Romo, Manning, Brady and Rodgers all rank among the top five highest-rated passers of all-time. However, while Rodgers, Manning and Brady have all won at least one Super Bowl, Romo has only one playoff victory in his career, preventing many from considering him among the league's best quarterbacks.

Jones was optimistic that will change this postseason, the first the Cowboys qualified for in five years.

"I'm confident that as we go into the tournament that we're going to have as good of quarterback play as any other team in the NFL, and I think Romo is there," Jones said. "I've said this, I'm going to say it one more time: Somehow, some way, he needs to have a Super Bowl to his name. He's that good."

Romo On Dallas Clinching NFC East
Tony Romo discusses how proud he is of his Cowboy teammates after their 42-7 win over the Colts, clinching their first division title since 2009.