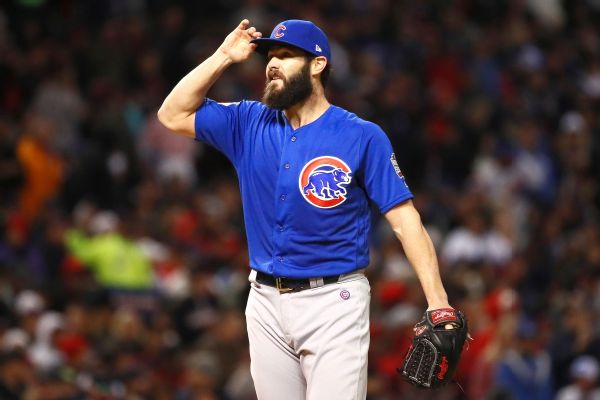 CLEVELAND -- Chicago Cubs manager Joe Maddon isn't changing his pitcher/catcher combination for Game 6 of the World Series against the Cleveland Indians on Tuesday night as rookie Willson Contreras will be behind the plate for Jake Arrieta, just as in Game 2.

Maddon also intimated that Contreras could be behind the plate for Game 7 on Wednesday if the Cubs can stave off elimination. The Indians lead the series 3-2.

"It's normally been Contreras withKyle (Hendricks), also, but tomorrow (Tuesday) you're going to see Willson," Maddon said in a Monday evening conference call with reporters.

There was some speculation that Maddon might start veteran catcherDavid Ross considering the magnitude of the game combined with Contreras' offensive struggles. He's just 1-for-14 (.071) in the World Series after starting the postseason hot. Maddon indicated Ross could be used later in Game 6 or 7 if starter Jon Lester is needed.

"There's also Jonny Lester in the bullpen, and you'd have to make a decision how you want to utilize that if you actually put Jonny in the game," Maddon said. "Who you want catching Jon in that moment? So there's a lot of little subplots going on."

Maddon wasn't sure how much closer Aroldis Chapman would be available for Game 6 after throwing 42 pitches over 2.2 innings in Game 5.

"I don't know that we could do what we did yesterday, necessarily," Maddon said. "But I'll talk to him tomorrow. He's a pretty strong guy. Beyond that I don't think we've overused him to this point. ... I'll definitely listen to what he has to say. I'm betting that he would probably think that he would be good for two innings, I would imagine tomorrow. But if it's not, we'll take what he can give us and then continue to work forward from there."

Maddon will have Kyle Schwarber at his disposal again as the series shifts back to Cleveland. He'll be the designated hitter in Games 6 and 7.

"I'm a much bigger fan of the National League game in general, but under these circumstances, where we are right now in the year, I'll take that American League game just to get Schwarbs involved," Maddon said.

Schwarber is 3-for-8 with two RBIs and two walks but hasn't started since Game 2.