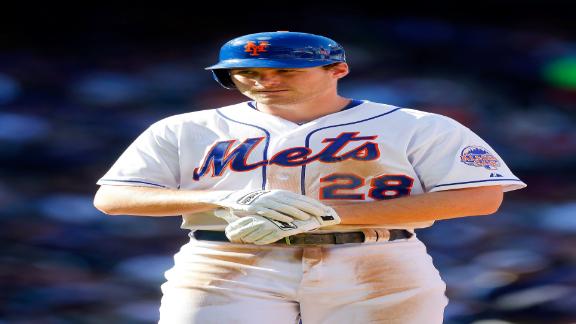 NEW YORK -- New York Mets second baseman Daniel Murphy on Thursday calmly deflected talk-radio criticism of his decision to miss the first two games of the season for the birth of his first child.

"I got a couple of text messages about it, so I'm not going to sit here and lie and say I didn't hear about it," Murphy said about the on-air criticism from WFAN Radio of his decision. "But that's the awesome part about being blessed, about being a parent, is you get that choice. My wife and I discussed it, and we felt the best thing for our family was for me to try to stay for an extra day -- that being Wednesday -- due to the fact that she can't travel for two weeks.

"It's going to be tough for her to get up to New York for a month. I can only speak from my experience -- a father seeing his wife -- she was completely finished. I mean, she was done. She had surgery and she was wiped. Having me there helped a lot, and vice versa, to take some of the load off. ... It felt, for us, like the right decision to make."

After receiving word about 11:30 p.m. Sunday that his wife's water had broken, Murphy traveled from New York to Florida and arrived in time for the birth of 8-pound, 2-ounce son Noah at 12:02 p.m. Monday -- about an hour before the first pitch of the Mets' opener against the Washington Nationals.

The Mets had Tuesday off before resuming the series Wednesday. Murphy remained with his family through Wednesday, as he was placed on paternity leave, and rejoined the Mets in time for Thursday's afternoon game against the Nats.

"You're a major league baseball player. You can hire a nurse,'' Mike Francesa reportedly said of Murphy on WFAN Radio during Wednesday's show. "What are you gonna do, sit there and look at your wife in the hospital bed for two days?"

Murphy said his wife delivered their son by C-section. On another WFAN show, host Boomer Esiason said, in part, that Murphy's wife should have had a "C-section before the season starts."

"I'm sure there might be some guy along the way that said, 'Hey, listen, it's too far to go. It's too far to travel. I'll see you in a few days,'" Collins said. "But you know what? I certainly feel it's very unfair to criticize Dan Murphy."

The collective bargaining agreement between MLB and the players' association allows for up to a three-day absence after being placed on paternity leave.

Asked if he was surprised about parental-rights criticism in this day and age, Murphy said: "Again, that's the choice of parents that they get to make. That's the greatness of it. You discuss it with your spouse and you find out what you think works best for your family."

"We had a really cool occasion yesterday morning, about 3 o'clock. We had our first panic session," Murphy said. "It was dark. She tried to change a diaper -- couldn't do it. I came in. It was just the three of us at 3 o'clock in the morning, all freaking out. He was the only one screaming. I wanted to. I wanted to scream and cry, but I don't think that's publicly acceptable, so I let him do it."

The name Noah, by the way, was selected for the biblical significance, not for flame-throwing Mets prospect Noah Syndergaard, Murphy joked.

"I told Syndergaard he's the 'other Noah' in my life in spring training," Murphy said. "The first thing when we decided to do it, I was like, 'People are going to think I named him after the monstrosity that throws like 1,000 miles per hour.' We didn't."