David Ferrer ousted in 2nd round 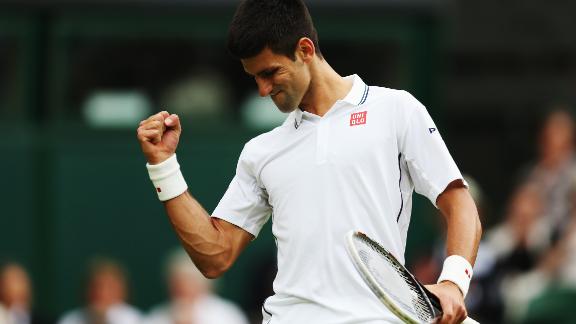 LONDON -- Top-seeded Novak Djokovic hung on at Wimbledon on Wednesday.

The seventh-seeded Ferrer's loss was his first in the second round at a major since the 2010 Australian Open. He made the quarterfinals at the last 10 Slams, including being the 2013 French Open runner-up.

"He was better,'' Ferrer said. "A lot of winners. In important moments, he was more aggressive than me.''

In his other 46 career Grand Slam appearances, Ferrer only lost once to a player ranked lower than Kuznetsov -- No. 126 Kei Nishikori at the 2008 U.S. Open.

Kuznetsov, the boys' champion at Wimbledon in 2009, got to the third round of a major for the first time. It was also his first victory over a top-10 player.

Djokovic, who lost in last year's Wimbledon final to Andy Murray, gave Stepanek a point at a crucial stage in the 11th game of the fourth set. He could have received a let from the chair umpire when a challenge by Stepanek on a ball called out was reversed. But Djokovic gave his opponent the point to put the game to deuce, and Djokovic won the game two points later.

The match ended on a successful challenge by Djokovic in the tiebreaker. His forehand cross-passing shot was ruled out, but the video replay showed it hit the line.

In other action, Murray dropped just two games as he overwhelmed Blaz Rola of Slovenia to reach the third round.

Murray trounced the 92nd-ranked Slovenian 6-1, 6-1, 6-0 on Court 1 in a commanding performance as he seeks to become the first British player to retain the Wimbledon crown in 77 years.

Murray broke eight times, saved the only three break points against him and had only 13 unforced errors in a match that lasted 81 minutes.

"If you can finish matches as quickly as possible it definitely helps in the long run," Murray said.

The 23-year-old Rola, playing in his first Wimbledon, has been playing mainly on the lower-tier Challenger Circuit and has very little grass-court experience.

"I played well today," Murray said. "This is the first year he's played on grass. He just came out of college and he's broken into the top 100. It was tough for him today, he doesn't have much grass court experience but I think he'll keep improving."

The man who shocked Roger Federer at Wimbledon a year ago, Sergiy Stakhovsky, pulled off another surprise Wednesday.

The 90th-ranked Stakhovsky used the same serve-and-volley style that worked against Federer in 2013 to beat 12th-seeded Ernests Gulbis 6-4, 6-3, 7-6 (5) and get to the third round at the All England Club.

Last year, seven-time Wimbledon champion Federer's streak of 36 consecutive major quarterfinals ended with a loss in the second round to Stakhovsky, who then lost his next four Grand Slam matches in a row.

But back at Wimbledon, the Ukrainian found his touch again, winning points on 32 of 45 trips to the net.

"The surface is fast. It's no bounce. It's speedy. It's exactly what I need. So pretty much I have the chance of finishing that volley if I have it," Stakhovsky said. "On other surfaces, not so easy."

Gulbis, who reached the semifinals at the French Open this month, double-faulted nine times.

Stakhovsky is now 2-22 for his career in matches against top-10 players, with the only two victories at the All England Club, against Federer and Gulbis.

"That's why he beat Roger last year on grass," said Gulbis, who is ranked 10th. "The guy has a good game plan. He comes in; he chips the ball; he takes out the pace."

Also, No. 11-seeded Grigor Dimitrov, coming of his win at the grass-court warm-up at Queen's Club, sailed into the third round by beating Australian qualifier Luke Saville 6-3, 6-2, 6-4.

Stakhovsky Upsets Gulbis
Sergiy Stakhovsky knocked off Ernests Gulbis 6-4, 6-3, 7-6 (5) to reach the third round at the All England Club.

Murray On Second Round Win
Andy Murray talks about his straight-sets win over Blaz Rola to advance to the third round at Wimbledon.