David Price to get Opening Day start for Red Sox 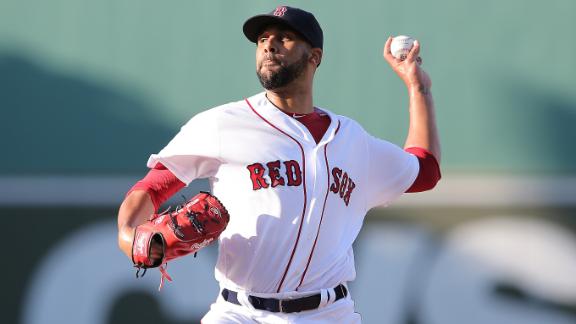 But while Price has been destined to be the No. 1 starter since he signed a seven-year, $217 million contract -- the richest deal ever for a pitcher -- in December, there has been considerably more intrigue regarding the rest of a rotation that was the chief reason for the Red Sox's downfall last season.

Right-handers Clay Buchholz, Rick Porcello and Joe Kellyare back -- and young lefty Eduardo Rodriguezwill also eventually return -- to reprise their roles in a group that combined in 2015 for a 4.39 ERA, third-worst in the American League.

Rodriguez will open the season on the disabled list after injuring his right knee in late February.

With questions about the rotation beyond Price, the Red Sox have been linked in trade rumors to San Diego Padres right-hander James Shields, who is owed $65 million through the 2018 season. But Shields is an extreme fly-ball pitcher, a factor that dissuaded the Sox from pursuing him as a free agent before last season. Team officials have indicated that their interest in Shields hasn't changed.

Farrell confirmed Tuesday that he is "leaning" toward knuckleballer Steven Wright for the spot vacated by Rodriguez. The order in which the starters will be used, however, still hasn't taken shape beyond Price and right-hander Buchholz, who will start the season's second game on April 6 in Cleveland.

The biggest factor, Farrell said, is "just the way guys have thrown." Based on that criteria, Kelly, who has a 1.35 ERA in five spring starts entering Tuesday's game, would pitch ahead of Porcello, a fellow right-hander who has a 9.77 ERA in four spring starts and gave up three home runs Monday against the Baltimore Orioles.

There are other considerations, too. Porcello has always pitched better in Cleveland (2.84 ERA in 12 career starts) than Toronto (7.39 ERA in five starts) and therefore might be a better choice for the season's third game against the Indians than the fourth game against the Blue Jays.

The Red Sox also have the option of bringing back Price on normal rest for the season's fifth game, April 9 in Toronto, and not using their fifth starter until the following day. Farrell has hinted at going that route.

Price will be making his fifth Opening Day start with his third team. He started the 2011, 2013 and 2014 openers for the Tampa Bay Rays and last season's for the Detroit Tigers. He's 2-1 with a 2.48 ERA in season openers.

"It's always an honor to throw in that first game," Price said. "It's definitely different. You have the added adrenaline. It's a great day. It's a holiday in a lot of senses. It's very special. To get to be a part of it for whatever team you're playing for is a special moment."

Since the beginning of spring training, Farrell has indicated that Buchholz would be the No. 2 starter and that he has been pleased with the pitcher's spring, especially the progress Buchholz made on his signature changeup.

Buchholz has landed on the disabled list before the All-Star break in each of the last six seasons.