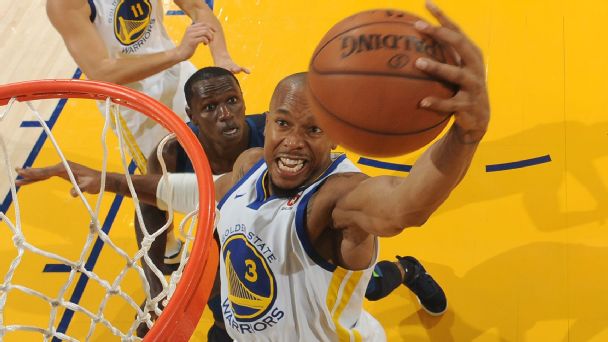 OAKLAND, Calif. -- After David West played in his 1,000th career game on Monday, the Warriors' reserve forward told ESPN he wouldn't have reached the milestone if he had chosen to play out his contract with theIndiana Pacers in 2015-16.

So in June of 2015, West declined a player option worth $12.6 million, which was the final year of his three-year, $37 million extension with the Pacers, who missed the playoffs in 2014-15. He said his wife, Lesley, was supportive of the decision.

At his age (34 at the time), it was a considerable amount of money to be leaving on the table. But he said his inner circle of friends and trusted advisers were not surprised he would take such an unconventional route to achieve his ultimate goal in the NBA.

"Nah, because they know how I get down," he said. "Obviously, people was saying you're taking a risk. A risk is no different at any other point. You just trust yourself and trust your ability to make sound decisions. We talked about that from Day 1 of having a financial plan and getting to the point in my career where I didn't want to make decisions just based off of money. I was just never one of those guys.

"I've been saving, doing what I have to do in terms of investments and being safe and making sure we got a nice nest egg where they don't have to worry about a crazy-ass lifestyle because we don't live a crazy-ass lifestyle. So, it really wasn't that difficult of a decision."

In addition to the money he was walking away from, West also knew he would have to sacrifice his starting role moving forward. He agreed to a one-year, $1.4 million deal with the San Antonio Spursin 2015-16 before signing with Golden State last season and capturing his first NBA title. He chose to come back to defend the crown this season.

"We just said we really want you back, but you do what's best for you and your family. And we're hoping he signs a 3-year extension this offseason," Warriors coach Steve Kerr said jokingly.

"I'm very comfortable out there," West told ESPN. "I don't have any pressure in these games. I feel like I can just come out and hoop. I've got a good repertoire and rapport with this group. We know each other, so right now it's just smooth."

"He takes great care of his body," Kerr said. "Every day he's in the weight room, he's eating well, he's taking care of himself. There's a reason he's playing at a high level. He knows how to play, he's very skilled, great passer, great shooter and when you've been in the league this long and you've played a thousand games, he's seen everything. So, he knows what's happening out there."

How long does West plan to keep playing?

"I don't know what I'm going to do at the end of the season," West said. "It all depends on how my body feels. Right now I feel good. I'll worry about that later."

As for the basketball salary he turned down a couple years ago, he plans to make up for it through other business ventures.

"I think a part of it is people being made to believe that they're only one-dimensional," West said. "I don't feel like this is the pinnacle of my existence. I've been fortunate to have a good professional basketball career, but I'll be under 40 years old when this is all said and done with, and I hopefully got another 40-plus years of life left. That's another opportunity to ascend to another realm and be great at something else. That's sort of how I look at life.

"I'm into education; I'm into renewable energy; I'm into international business; I'm into domestic business; we have real estate; we're working the stock market. We're very diversified in terms of our portfolio. We have some private holdings and equity in certain companies. I'm just in a good space, man, and I just happen to still be able to play basketball and play in a thousand games."
Report a correction or typo
Related topics:
sportsespngolden state warriorscleveland cavaliersdavid westnbalebron james
Copyright © 2020 ESPN Internet Ventures. All rights reserved.
More Videos
From CNN Newsource affiliates
TOP STORIES