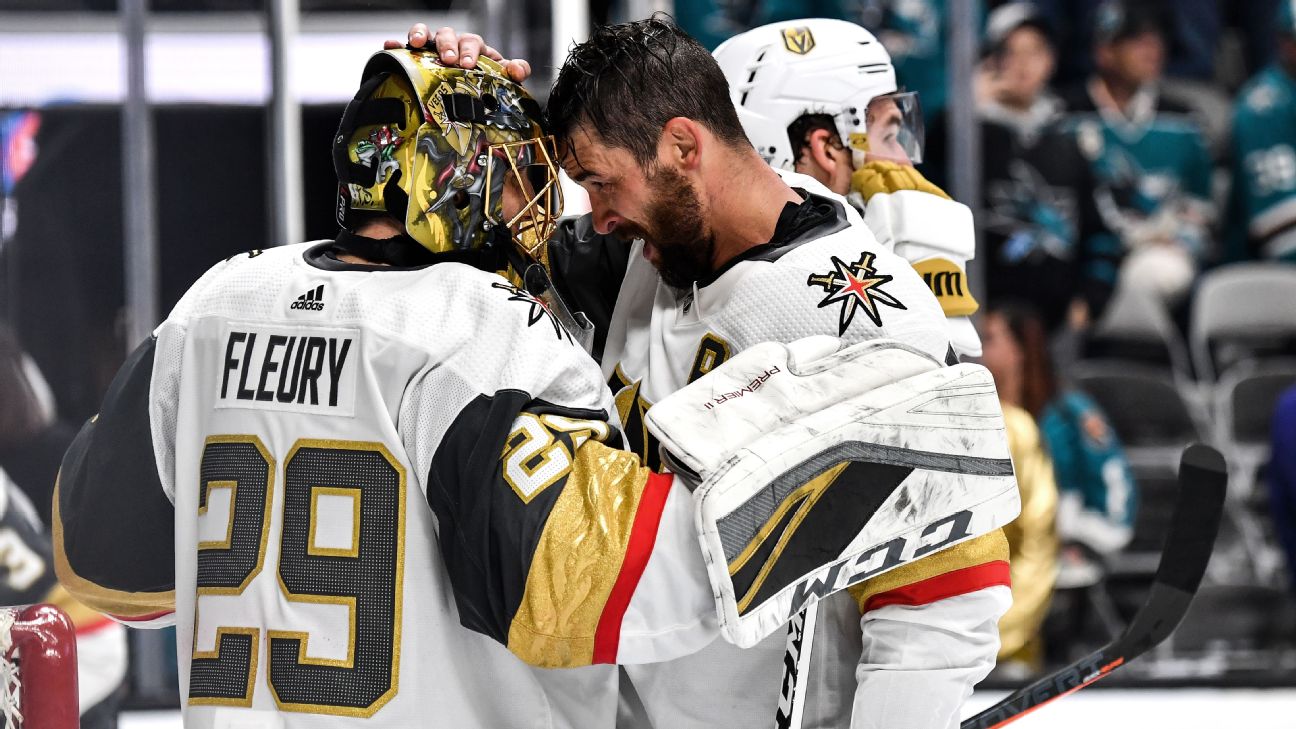 After a wild first period that saw the Knights and Sharks both score three straight goals, San Jose defenseman Brent Burns appeared to give his team the lead just 51 seconds into the second frame. But the referees waved off the goal, citing contact with Knights goalie Marc-Andre Fleury by Sharks center Logan Couture.

They took it one step further by giving Couture a two-minute penalty for goalie interference, which eliminated any chance for the Sharks to use a coach's challenge to potentially overturn the call and also gave the Knights a power play. When Mark Stone scored his third goal of the playoffs with Couture in the box, it was an undeniable swing in momentum: The Sharks having gone from a 4-3 lead to a 4-3 deficit in the span of 40 seconds.

"The travesty of the call is that if they had called goalie interference [without a minor penalty], we could have challenged it," DeBoer said after the 5-3 Golden Knights win, knotting their series at 1-1 as it shifts to Las Vegas on Sunday. "I think the league would have recognized that Fleury was outside the crease, awarded us a goal, and we would have been up 4-3. It's a different game. Instead, it's a two-goal swing."

There were two points of contention on the play. The first regarded the disallowed goal. The Sharks contended that Fleury had moved outside his blue crease and "into the white," and that any contact with him wasn't intentional from Couture and could have been the result of contact with Vegas defenseman Brayden McNabb.

"Tough call," Couture said. "Being involved in it, I thought it was outside of the crease. I thought Fleury kind of ran into me, but I'll have to watch the replay on it. McNabb touched me."

Asked what the referees said to him, Couture said, "He said I ran into him, I hit him and no one touched me, I went in myself. I have not seen the replay. Was I pushed? Was I in the crease? You guys will have to tell me, because I haven't seen it."

DeBoer saw the play and disagreed.

"The problem that I have with that is that he's entitled to that ice, and because Fleury's outside the crease and [Couture] is just going to that area, there's no intent at all to run into Fleury," DeBoer said.

Then there was the penalty for goalie interference, which requires something more than just a glancing bump to earn two minutes in the box. Vegas coach Gerard Gallant, who called the momentum swing "awesome," felt that Couture delivered a blow to Fleury's head.

"It was definitely the right call. He hit him in the head. He's trying to play the puck, he's defending his goal, and the guy skates through the blue paint and bumps him in the head. To me, it's pretty obvious," he said. "I don't know what they're saying over there."

Here's what Sharks winger Evander Kane was saying over in the San Jose locker room: Fleury's embellishment drew the call.

"I know they do a lot of complaining about Fleury and the traffic in front. When you're extending the blue paint a few extra feet, it makes it really tough for the opposition to stay away from him when they're battling the D-men in front," he said. "It's a pretty good reaction by him. He tricked them."

There are plenty of reasons why the Sharks lost Game 2, from a leaky defense that necessitated the pulling of goalie Martin Jones in the first period to a power play that went 1-for-8 and gave up two short-handed goals. But while it may not have been the determining factor, the goalie interference call was certainly a factor in the Vegas win.