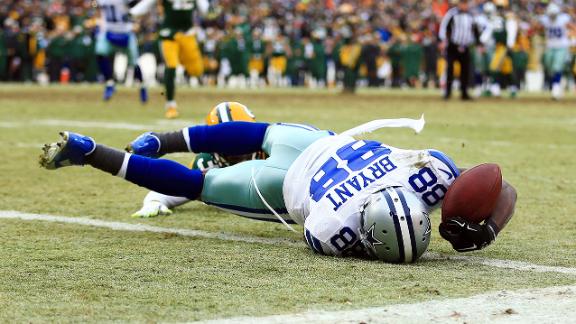 GREEN BAY, Wis. -- For the second straight week, theDallas Cowboys'season came down to a decision by the referee.

On Sunday they were not the beneficiaries afterDez Bryant's 31-yard catch was overturned via replay by referee Gene Steratore. Instead of being a yard away from a potential game-winning touchdown, the Cowboys saw the Green Bay Packers run out the clock on the ensuing drive in the 26-21 divisional-round victory.

As a result, the Packers will move on to the NFC Championship Game next week at the Seattle Seahawks,and the Cowboys will have to spend the offseason wondering "what if."

Cowboys coach Jason Garrett would not pin the loss on the overturned call, but he disagreed with Steratore's ruling.

"I thoughtTony (Romo)made a great throw, Dez made a great catch on the ball," Garrett said. "Obviously it was ruled a catch at the outset. It looked like to me he had three feet down. What they describe to us all the time is 'a move common to the game,' and Dezreached out for the goal line like he's done so many times. It's a signature play for him. He maintained possession of it throughout, in my opinion.

"But let me make it really clear: This game wasn't about the officiating. We had 60 minutes. We had an opportunity to come up here and win a football game, and at the end of the day we didn't get that job done. That play was big in the game, but there were other plays in the game and unfortunately we didn't do the things necessary to win the ballgame."

Steratore said there were numerous angles that showed the ball hitting the ground and did not agree with Garrett's assertion that Bryant made a move common to the game. After consultation with the New York offices, Steratore decided to change the call.

"Although the receiver is possessing the football, he must maintain possession of that football throughout the entire process of the catch," Steratore said in a pool report. "In our judgment he maintained possession but continued to fall and never had another act common to the game. We deemed that by our judgment to be the full process of the catch and at the time he lands and the ball hits the ground it comes loose as it hits the ground, which would make that incomplete. Although he re-possesses it, it does contact the ground when he reaches so the repossession is irrelevant because it was ruled an incomplete pass when he had the ball hit the ground."

Bryant leaped at the 5 for Romo's deep ball but Shields was able to get his hands on the ball to slightly affect the security of the pass. Bryant took three steps as he was going to the ground and appeared to reach forward when the ball hit the ground and popped in the air.

Bryant was stunned at the reversal.

Bryant said he was reaching for the goal line as he was coming down to the ground.

"I wasn't off balance," Bryant said. "I was trying to stretch for it and get in the end zone."

Bryant took to Twitter after the game, imploring the league to change the rule that prompted the call reversal.

Packers cornerback Sam Shields, who was defending Bryant on the play, initially though the catch was good.

"The refs made a good call on that," Shields said. "Things go down like that, so, hey, it's a part of football."

Green Bay quarterback Aaron Rodgers cited the Calvin Johnson rule from 2010 when theDetroit Lionshad a potential game-winning touchdown wiped out in 2010. Steratore was the referee that game as well.

"Well, everybody knows the Calvin Johnson rule," Rodgers said. "I remember watching the film of that game and saying 'How in the heck is that not a catch?' But it's been a few years since then and you know you have to control the ball all the way to the ground, so when I saw the replay, I was confident that it would be an incomplete pass."

On Sunday, the Lions tweeted that they can sympathize with Bryant and the Cowboys.

In their wild-card win against the Lions, the Cowboys benefitted from an overturned pass interference penalty on linebacker Anthony Hitchens in the fourth quarter and scored the game-winning points on the next possession.

They were not as fortunate Sunday as Packers coach Mike McCarthy won a replay challenge for the first time this season. The Packers were 0-for-4 before Sunday's ruling.

"I just felt that when Dez caught the ball and the ball hit the ground he didn't complete the catch," McCarthy said. "Obviously from what I saw, I thought they made the right call."

Dez Bryant: 'Never Seen Nothing Like It'
Cowboys wide receiver Dez Bryant discusses the fourth-quarter play in which Bryant's 31-yard reception on fourth-and-1 was overturned.

Cowboys' Future After Loss To Packers
ESPN's Todd Archer and Jean-Jacques Taylor recap the Cowboys' loss to the Packers and look ahead to the offseason moves Dallas may make.